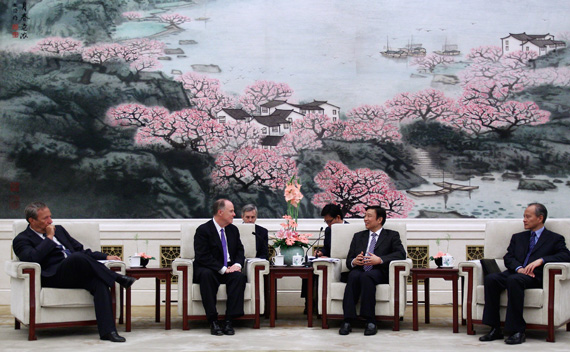 Last week when I was in Beijing, I had a pleasant surprise. Everyone was talking about the new and improved U.S.-China relationship. Chinese officials were calling the visit of senior U.S. officials (Larry Summers, Jeff Bader, Tom Donilon, etc.),  which had just finished up, a clear success. The tribulations of the spring and summer—Taiwan arms sales, the Dalai Lama’s visit with President Obama, the Cheonan incident, and the fracas over the South China Sea—seemed a distant memory.

For the Chinese, most important appeared to be the calming of the waters of the South China Sea. According to Chinese officials, progress was made by simply returning to the status quo: The United States won’t take sides in the dispute; and while China claims sovereignty over the islands, it is willing to discuss joint development of resources with other claimants on a bilateral basis.  (Of course, the United States actually has taken sides, at the very least calling for multilateral negotiations.)

One Chinese official also suggested that the United States and China could cooperate to avoid being blamed by the rest of the world for global challenges such as climate change. This is an interesting notion—in addition to working together to solve the problem, we should focus our energy on standing up to the bullies of Europe, Japan and the developing world, who are very concerned about the inability of the two largest emitters of greenhouse gases (China and the United States) to make significant progress on reducing their emissions. This proposal might actually find some takers in Congress.

Of course, by the time I returned to the States, the papers were filled with articles about the United States launching two new WTO suits against China and the specter of a congressional bill that would punish China with trade tariffs for consistently undervaluing its currency.

This looks to be the new norm—a perpetual, rapid cycling of upswings and downswings in the relationship. We’re unlikely to have a sustained expansion of trust and ties; rather we are going to claw our way to small victories of cooperation and understanding. The good news is that there really is a ballast—the fact that neither the United States nor China wants the relationship to spiral down out of control. It may be the only thing we really agree on, but it will have to be enough for the time being.

Struggles with the Software