Voices from the Field features contributions from scholars and practitioners highlighting new research, thinking, and approaches to development challenges. This article is authored by Richard C. Eichenberg, Associate Professor of Political Science at Tufts University.

In August 1995, President William Clinton established the President’s Interagency Council on Women and declared:  “We are putting our efforts to protect and advance women’s rights where they belong–in the mainstream of American foreign policy.”  In January 2013, President Barack Obama issued a Presidential memorandum on the “Coordination of Policies and Programs to Promote Gender Equality and Empower Women and Girls Globally.” The memorandum established an inter-agency working group to coordinate government-wide implementation of policies to promote global gender equality.

There has been some scholarly attention to the subject. Karen Garner chronicled the origins of the policy in the Clinton administration. Valerie Hudson and Patricia Leidl traced the evolution of the policy through the Obama years. Helen Laville reviewed critical perspectives on the role of women’s rights in American policy since 1945.

Nonetheless, questions remain about the level of commitment to the pursuit of women’s rights in foreign policy. Has declaratory policy actually produced increased policy activity? In what policy areas? Is the policy focused on specific countries or regions? Which presidents and secretaries of state have been most active in the pursuit of global gender equality?

A new collection of data documents the volume of policy activity announced by the office that is most responsible for the pursuit of gender equality in U.S. foreign policy: the Secretary’s Office of Global Women’s Issues in the U.S. Department of State (S/GWI; the name has varied over the years). The following is a description of the procedures employed to collect this data and summarize the number of policy actions in the years 1995-2015. Additional technical details on the project are available in this report. Future reports will focus on the apparent priority placed on gender equality by different secretaries of state; the programmatic focus of policy; and the regional focus of policy actions. A separate data collection on gender equality actions in USAID is also underway.

In this research, policy activity is defined as any policy action that is publicly announced or otherwise reproduced on the S/GWI website. These actions, which appear on the main webpage of the Secretary’s Office of Global Women’s Issues, include any occurrence of the following: a government official speaking in public; all remarks, testimony, speeches, round table discussions, interviews, and public appearance; and all press releases, reports, fact sheets, newsletters, op-eds, legislation, and blog posts.

Two examples illustrate the sorts of actions counted: In June of 2008, First Lady Laura Bush traveled to Afghanistan to meet with a variety of women’s groups and to announce several grants to support universities and literacy programs. In March 2016, Secretary of State Kerry announced a $47 million initiative for a Global Strategy to Empower Adolescent Girls.

This measure of the policy output of one office may not alone provide a comprehensive picture of the government’s commitment to women’s rights in foreign policy; that will require a fuller study of the budgetary resources and personnel that are committed to the policy, together with a qualitative assessment of the depth and persistence with which the policy is pursued.

Nonetheless, the S/GWI is the US government’s primary implementing office in the pursuit of global women’s rights, and a description of the volume of its policy activity and its programmatic and geographic priorities represents an important tool to trace the evolution of an important foreign policy priority.

The graphic below displays the number of policy actions announced by the S/GWI in each year since 1995. Three features of the data stand out.

First, the priority of women’s rights in American foreign policy has indeed grown. In the last two years of President Clinton’s first term, a total of twelve policy actions were announced. In the last two years of President Obama’s first term, at least one policy action was announced every two to three days (151 actions in 2011). Although there was a decline after 2012 in the volume of policy activity, in 2015 the number of actions was nonetheless higher than in any year prior to the Obama administration. 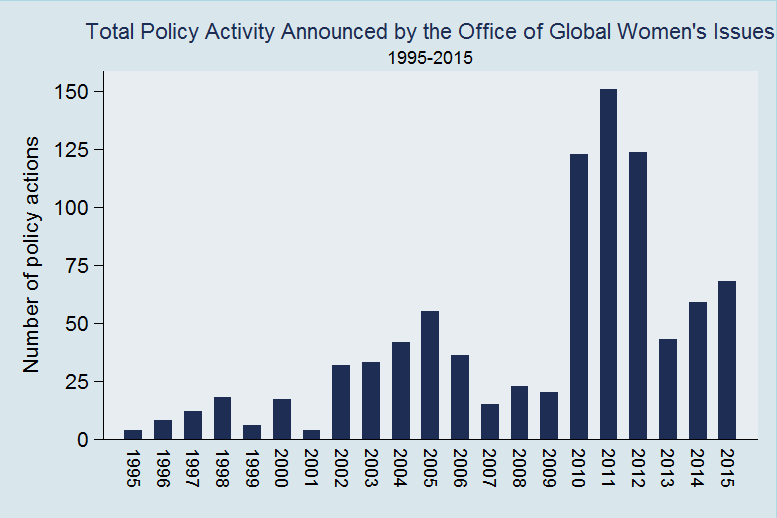 Second, there are two spurts in policy activity related to the rights of women and girls: during the middle years of the Bush presidency (2002-2006) and, most prominently, during the first term of the Obama presidency (especially 2010-2012). In the case of the former, the spike in activity occurs during the most intense years of the wars in Afghanistan and Iraq. A future report will explore the extent to which policy activity was in fact focused on those two countries. In the case of the increase during Obama’s first term, it is of course possible that policy activity was simply following the President’s own priorities, but that explanation falters in light of the substantial decline in activity that occurred after 2012. It therefore seems equally plausible that the peak of policy activity during the first Obama term was due to the personal interest and priorities of Secretary of State Hillary Clinton, who had been the first honorary chair of the President’s Interagency Council on Women before giving her famous 1995 speech to the United Nations Fourth World Conference on Women in Beijing. A separate report explores the involvement of Secretary Clinton and other policymakers in shaping policy activity related to women and girls.

Third, although policy activity does grow incrementally, there are also periods of decline, specifically at the end of the second Bush term and the end of the first Obama term. In each case, the likely explanation is a pressing competing priority on the agenda of the secretary of state (the Iraq surge under Secretary Condoleezza Rice and the negotiations with Israel, Palestinians, and Iran undertaken by Secretary of State Kerry). Nonetheless, each decline is followed by a period of increase, which suggests that women’s rights have become an institutionalized priority in American foreign policy.

Read full reports and view datasets online here or follow @IkeEichenberg on Twitter. I am grateful for the assistance of three Tufts University students who work with me on this project:  Lillian Hartzell, Lara LoBrutto, and Elizabeth Robinson.