Skip to main content
The Power of Witness: Imagery and Mass Atrocities

Last week, I was fortunate to attend a workshop at the U.S. Holocaust Memorial Museum, “Power of Witness: The Use of Technology in Preventing Mass Atrocities.” Among the topics discussed were the current and potential use of journalists, victims’ reporting, satellites, aircraft, and drones (presented by myself) to reveal to the outside world what is happening on the ground. It was remarkable to hear from a wide range of dedicated people who utilize innovative technologies and collaborative arrangements to document prospective war crimes for dissemination to the media, people in the target country, foreign leaders, criminal tribunals, the global public, and others.

Of course, harnessing the power of witness is not a new endeavor. As Martha Finnemore notes in her book, The Purpose of Intervention: Changing Beliefs About the Use of Force, the domestic debate surrounding intervention for humanitarian purposes is highly contested. Finnemore describes the influence of the media to “arouse public opinion and influence policy…by increasing exposure and creating familiarity where little existed previously.”

Over the past 150 years, intervention proponents have increasingly relied on vivid and graphic imagery from the target country to rally support to their cause—including U.S. policymakers, for better or for worse.  In 1995, U.S. ambassador to the UN Madeline Albright fought to declassify three CIA satellite photographs of Srebrenica in order to show them to a closed session of the UN Security Council. Of course, such imagery is subject to interpretation and exploitation by internal opposition groups, exiles, or foreign governments to justify military interventions. On February 5, 2003, Secretary of State Colin Powell briefed the UN Security Council on “Iraq: Failure to Disarm,” which included photographs (remember the “mobile biological warfare agent production plants?”) and audio clips that purportedly confirmed the existence of Iraq’s WMD program, which did not exist.

Consider this brief survey of how powerful imagery emerged from foreign conflicts or major wars, and the impact it had on the homefront, policymakers, or the international community.

The Crimean War is considered to be the first media war, in which the telegraph and camera enabled news and images from battles to be transmitted to the homefront in hours instead of weeks. For the first time, the British public saw photographs of the front line that brought far-off battlefields to life. 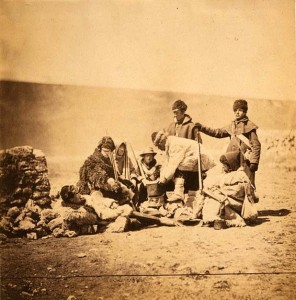 The Ottoman Turks deported hundreds of thousands—some argue more than a million—of Armenians to the desert of Syria. Western news organizations captured the unfolding events, as many Armenians died en route from starvation or were killed by Ottoman forces. Today, most scholars and historians consider this a clear act of genocide, although the Turkish government strongly rejects the claim and resists the use of the word by any government to describe the Armenian mass deaths. 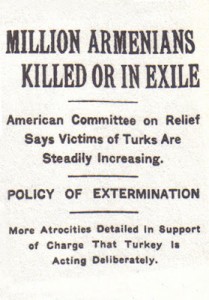 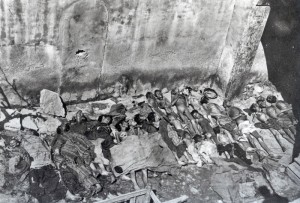 World War II was a watershed in the global understanding of atrocities and genocide (a term coined in 1943 by Polish lawyer Raphael Lemkin, which combined the Greek prefix genos, meaning family or race, and the Latin suffix cide, meaning killing), largely due to the horrific images that emerged from concentration camps in Europe after the arrival of Allied soldiers. The construction of a new global human rights regime was a direct response to the Nazis’ Final Solution, in the hopes that signatories to the 1948 Convention on the Prevention and Punishment of the Crime of Genocide would ensure that the five specific acts that comprise genocide wouldn’t happen again:

(a) Killing members of the group;

(b) Causing serious bodily or mental harm to members of the group;

(c) Deliberately inflicting on the group conditions of life calculated to bring about its physical destruction in whole or in part;

(d) Imposing measures intended to prevent births within the group;

(e) Forcibly transferring children of the group to another group. 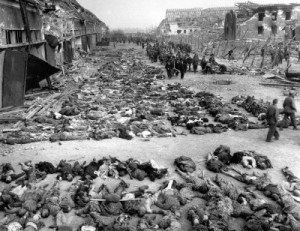 The Vietnam War was the first fully televised war, in which the American public received regular updates on the conflict through photographs and videos. (For just one example, see the real-time CBS News video that captured an Army platoon under fire from mortars and sniper.) Photojournalism played a large role in shaping public opinion on the war, particularly through its more graphic images. Now-infamous images, such as the photograph by Eddie Adams of a general shooting an unidentified man in the head, defied the U.S. government’s portrayal of the war effort fueled the Vietnam protest movement in the United States. 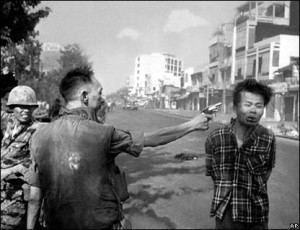 This photo ran on front page of the New York Times under the headline "Street Clashes Go On in Vietnam, Foe Still Holds Parts of Cities; Johnson Pledges ‘Never to Yield.’” 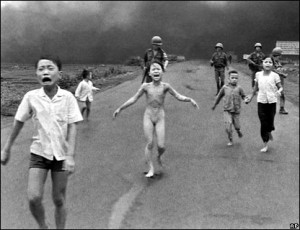 The Khmer Rouge regime led by Pol Pot carried out a widespread and systematic genocide, killing approximately 1.7 million people, or roughly 20 percent of the population. In its policy of internal “purification,” the regime deported the urban population to the countryside where brutal labor conditions, disease, and starvation killed hundreds of thousands. The government also targeted and executed political groups and suspected opponents or rivals.

The killing ended when the Vietnamese army invaded Cambodia in January 1979; the first images of the atrocities committed were taken by Vietnamese soldiers. 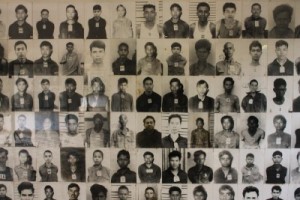 Images of victims from the Tuol Sleng Prison, also known as the “S-21” interrogation and extermination center. In total, there are over five thousand photographs of prisoners at the facility; the vast majority of victims are unknown.

The exhumation of the Choeung Ek killing fields in 1980 offered some of the first concrete evidence of the atrocities committed by the Khmer Rouge regime (Yale Archives/Ben Kiernan).

In August 1992, a number of Western newspapers, including Newsweek and Time Magazine, called for intervention by publishing images as proof of a “new Holocaust” occurring in Bosnia and Herzegovina. Over the course of the conflict, an estimated 200,000 Muslims were killed by Bosnian Serb forces. 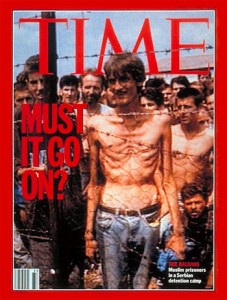 Over three months, Rwanda witnessed an ethnic cleansing campaign that killed an estimated 800,000 people, largely carried out by the Hutu majority against the Tutsi minority (although moderate Hutus were targeted as well). The international community reeled at the speed and scale of the genocide, which defied all conventional norms of conflict prevention and early warning.

Horrific images emerged from Rwanda over the course of the genocide as the world stood paralyzed. 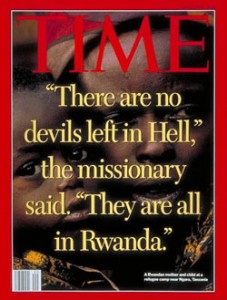 On June 10, 2010, violence erupted in Osh, Kyrgyzstan, between ethnic Kyrgyz and Uzbek communities. Over the next four days, it is estimated that between 500 and 2,000 people were killed as well as over 400,000 displaced. Satellite images (as seen below) tracked and mapped the conflict as it escalated. In particular, such images captured “SOS” signs written on roadways and buildings. 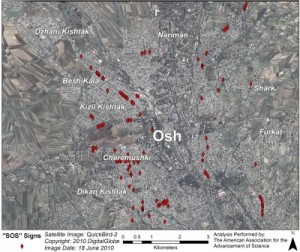 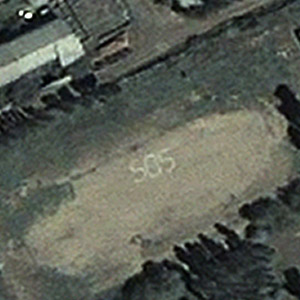 For most of recent history, news and images of conflicts and atrocities reaching the outside world were dependent on reporters, photographers, and a small number of activists on the ground. However, technology and social media such as camera phones, blogs, YouTube, Facebook, and Twitter have permanently and dramatically altered the way the world communicates and receives news.

During the so-called “Green Revolution” in Iran in 2009, the brutal suppression of non-violent protesters by the regime was extensively documented by ordinary people organizing demonstrations and sending updates, photos, and videos on Twitter. An excellent report by the RAND Corporation describes the power of social media as a particularly effective tool to “generate political opposition, shape political discourse, and facilitate action in the face of a powerful regime” in Iran and beyond.

Today, news reports on the protracted conflict in Syria rely heavily on reports from citizens on the ground via Skype, videos taken on phones uploaded to YouTube, and updates posted on Facebook. According to one estimate, 80 percent of the videos of the Syrian conflict that have been broadcasted by mainstream news organizations were shot by amateur videographers. In addition, unmanned U.S. intelligence drones have flown over Syria, collecting information and monitoring the Syrian military’s movements. Due to technology and social media, there is unequivocal evidence of atrocities committed, but still amost no on-the-ground access for UN or human rights investigators to better verify the accounts.

In 2009, former British prime minister Gordon Brown reflected on the emerging power of social media: "You cannot have Rwanda again because information would come out far more quickly about what is actually going on and the public opinion would grow to the point where action would need to be taken.” While we hope that will be the case, it is the responsibility of the international community to use the power of technology to better inform and shape its decision-making process in order to take actions commensurate with the political will, available resources, and potential to make a real impact.