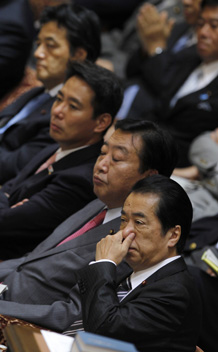 The Extraordinary Session of Japan’s Diet began on Friday—amidst deep anxiety about how the split in the Upper House will impede the government from pushing forward its policy agenda.

For the United States, this legislative session—and the ability of the Kan cabinet to work through these difficult dynamics—will offer much food for thought as to the prospects for cross-party cooperation on policy choices related to the U.S.-Japan alliance. As I noted in my op-ed on July 16 in the Nikkei (published in English in Nikkei Weekly on July 26) and in the longer PacNet essay, our ability to work closely with Japan may depend on the partnerships shaped in this early test of Kan’s ability to navigate and lead policy deliberations in a divided parliament.

Coalition building will be the name of the game in Japan for some time to come, and it will reveal just as much about Japan’s opposition parties as it will about the staying power of the DPJ.

In the days leading into the new legislative session, the LDP’s leadership threw down the gauntlet, claiming their intent to block the ruling party from achieving its agenda, in good old-fashioned “opposition” style. But some of its younger leaders—including  Shinjiro Koizumi, son of Japan’s former prime minister, argued that as opposition parties their job is not simply to say “no” but to also articulate their own ideas and legislative goals. If this is the spirit that prevails among Japan’s opposition parliamentarians, this Diet session will indeed become a site of transformation in the longer term effort to bring better political leadership to Japan’s policy making process.

It goes without saying that Prime Minister Kan’s cabinet will need to demonstrate determination and flexibility in these next few weeks. That is a tough combination to achieve at the best of legislative times, but with the deep disappointment in the Upper House electoral outcome, the prime minister must convince his own party’s rank and file that he can cajole, encourage, and stimulate cooperation from his party’s very recent electoral adversaries. Clearly, this legislative session will make or break the prime minister’s chances of winning his party’s leadership election scheduled for September 12. But it also may hold the entire Democratic Party of Japan’s future in the balance. Arguably, a critical cause of the early difficulties in the DPJ-led government was the unmanageable dynamics with its coalition partners, the Social Democratic Party (SDP) and the People’s New Party (PNP).

This time round the DPJ has chosen not to create a new coalition government. The PNP remains in for now, and the fate of the Japan Post legislation will determine the future of that partnership. The DPJ now has to contend with a number of new potential partners—the New Komeito Party and the newcomer, Your Party—who can make or break their other legislative initiatives, including tax reform and the government’s economic growth strategy. The lingering notion of a Grand Coalition with the LDP remains, and Cabinet Secretary Sengoku’s public reference to this possibility on July 26 should not be overlooked.

Japan’s politicians of all stripes will need to rise to the occasion in the next few weeks, or the country will be caught in a never-ending electoral struggle and good governance will seem a distant goal at best.

No Winners from the Sinking of the Cheonan

Singapore’s National Elections: Will a Pandemic, and a Shifting Society, Lead to a Different Result?