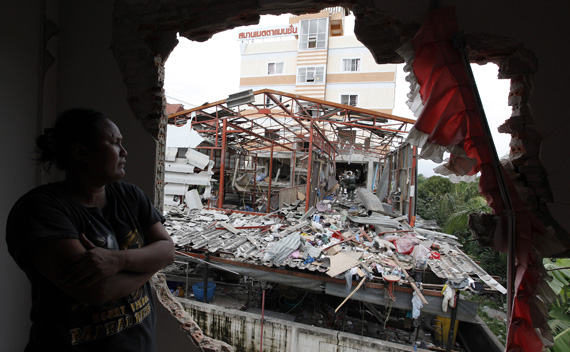 On Tuesday, a bombing at an apartment building in Bangkok killed three people and wounded four others. This attack got only minimal coverage in the international media – largely because, over the past six months, bombings have become routine in the Thai capital, which in the past, despite its reputation for sleazy nightlife, was a very safe city. There have been dozens of blasts in Bangkok over the past year (and bombings in regional capitals in Thailand as well), and though the police sometimes round up suspects, usually they seem stumped. “It was likely to have been a bomb but we don’t know which kind and why it was there,” the Thai metropolitan police spokesman told the Straits Times of Singapore. Well, that’s encouraging.

The bombs point out two larger issues. First, the lingering political stalemate in Thailand, and the lack of any resolution (see my previous post on “Soft Authoritarianism”) is driving some populist anger underground and toward violent methods. This violence then provides more reasons for the security forces to crack down – they still have not lifted the state of emergency in Bangkok and much of the Thai media operates in a climate now of total fear – which will only lead to a further cycle of violence. For a foreshadowing of this, look to southern Thailand, where locals’ radicalization was met by an overaggressive government response (under former Prime Minister Thaksin Shinawatra), which then sparked worse violence.

Second, the bombings raise the question of the Thai security forces’ competence. Since the military coup of 2006, the budget outlay on the military has expanded enormously. Thailand has few real external enemies, so one should imagine that this money is supposed to be spent on domestic counterterrorism and other methods of domestic control. Also, there is a state of emergency in force in Bangkok that gives the security forces enormous powers of search and arrest. If there were ever a situation amenable to cracking down on local violence, this would be it. Yet often the Thai security forces have no leads on bombers, no ideas of where to look, and resort to vast conspiracy theories to explain attacks. So, one has to ask the question, what are Thai citizens even getting out of this state of emergency, if it is not actually providing security or better police work?

Wen Jiabao’s Last Stand on Political Reform: Can he do it? Yes he can?