Police pay became a hot topic of discussion over the past two weeks with the release of a Mexican government report breaking down police salary by state.  The disparities are stark -- with police officers in Tamaulipas earning monthly salary of just $268, while their counterparts in Aguascalientes bring home about $1,342 a month.

An obvious question is how does this affect crime and violence? The answer is less obvious. Overall, the data shows no straightforward correlation. Patrick Corcoran lays out many other factors that affect public safety, including each officer’s moral compass,  the chances of getting caught the severity of the punishment. Daniel Sabet’s study on corruption within the Tijuana police makes this point, laying out the complicated calculus  behind an officer’s decision to fall in (or not) with the bad guys.

Still, the graph below of police salary vs. homicide rate by state suggests that police pay does matter. While we see a lot of variation at the low and the middle end of the scale, high salaries and low violence are strongly correlated. The top nine payers-- including states that are in drug traffickers’ line of fire (e.g. Baja California) --  have relatively few murders per capita. While not the only and last word, this should encourage lagging state governments to rethink their spending priorities. 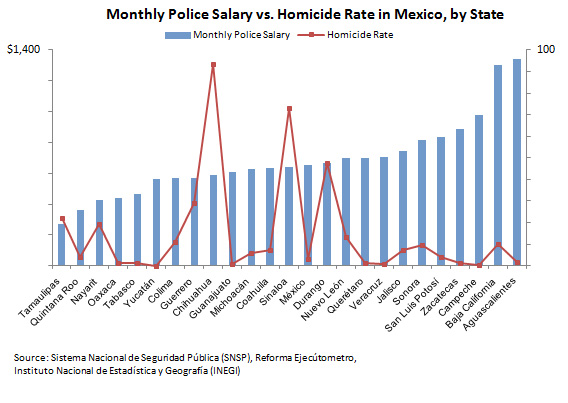