Words don’t really do justice to the brutality of recent downturn in Korean and Taiwanese exports. 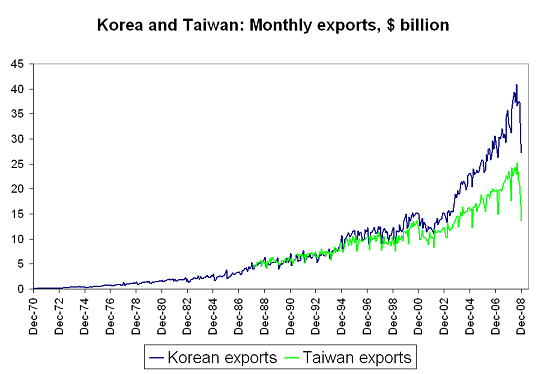 These look a lot like charts of financial variables after a bubble bursts, not charts of the level of exports. That isn’t good.

Looking just as the monthly data risks being misleading. There is a lot of seasonality in Taiwan’s exports. They usually dip in February. It is a short month, it often corresponds with the Chinese new year and the data isn’t seasonally adjusted. A small dip in December after the end of the Western holiday season also isn’t unusual. But such a big dip in December is most unusual. Plotting the rolling 3m sum eliminates the big February dip. The current downturn is real. 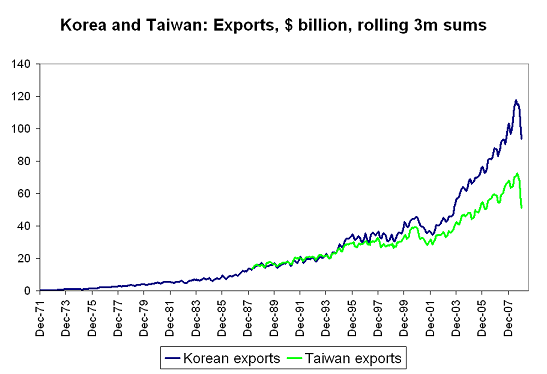 The data do not look much better if plotted as a percent change. The y/y change in the 3m rolling sum isn’t quite as bad as it was at the depth of the tech bust. But give it time. The 40% fall in Taiwan’s December exports is worse than anything observed then. 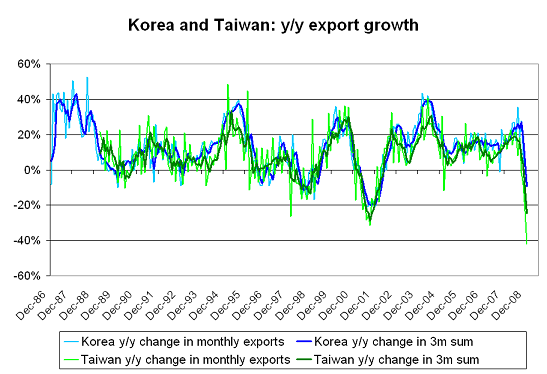 Almost all of Taiwan’s exports seem to go to China for final assembly. Korea though exports to both China (electronic components, steel, no doubt other products) and the US (cars). And there has been a very sharp fall in both Korean shipments to both the US and China. Then again, it seems that exports are down across the board. Europe doesn’t look much different.* 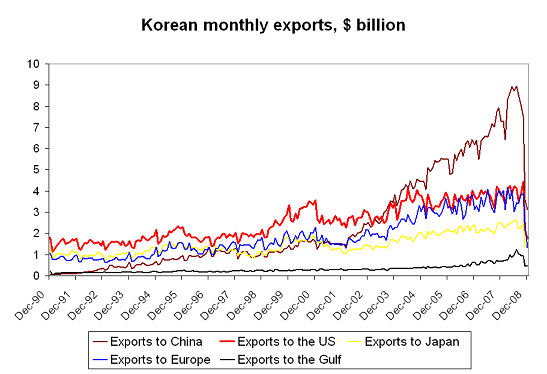 Korean and Taiwanese imports are down too. Korea’s trade balance is actually improving even as its exports fall off a cliff. Imports from the Gulf are following the trajectory one would expect.

What of China? Well, the official data isn’t out -- but if the data leaked to Dow Jones is accurate, China is following a similar trajectory but with one difference: its imports are down more than its exports. In December, year over year exports were down close to 3% and year over year imports were down 21%. 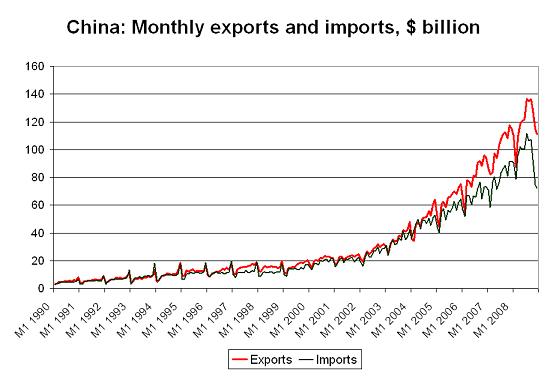 Korea and Taiwan aren’t the global economy. But they both report their trade data quickly – and they both export a ton. I wish I could say that I thought they were sending a deceptive signal ….

a) The trajectory of this downturn looks much worse than the trajectory of the 2000 recession. That isn’t news. But it is still worth noting. Korea and Taiwan export a lot of electronics, so they were among the hardest hit by the tech bust.

b) It is striking that neither Taiwan nor Korean exports seem to have been impacted by the (modest) slowdown in US imports that started in 2006. They made up for slower export growth to the US – counting both their direct exports to the US and their indirect exports through China – with strong growth in their exports to Europe, China and the Gulf. Y/y export growth rates for Taiwan and Korea were actually up a bit earlier this year, during the peak of "decoupling." No more …

c) Policy choices matter. From 2002 to 2004, the won depreciated significantly v the euro. After 2004 the won rose the RMB - -and China slammed the brake on domestic demand growth. That too had an impact on Korea’s exports to China. These trends show up more easily on a graph that shows the percentage change in the rolling 12m sum of Korean exports (a variable that moves slowly but capture big trends) than in the monthly data. 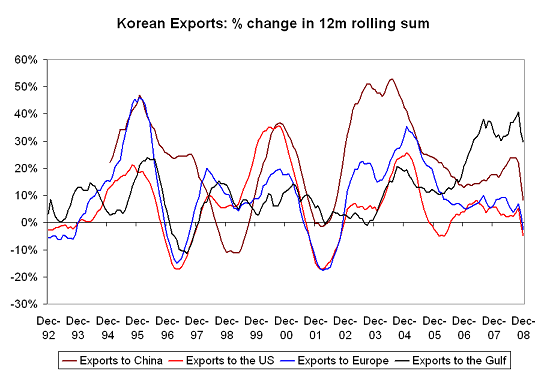 But right now the sheer severity of the global downturn dominates all other variables. Everything is shrinking.

Thanks to Paul Swartz of the Council on Foreign Relations for help with the data downloads and the graphs.

* To flesh out the November and December data for Europe, I used the the fall in Korean shipments to France to extrapolate the fall for smaller European economies. Using the fall in exports to Germany would have produced an even sharper fall. But this data should be taken with a grain of salt.

China hasn’t (yet) lost its appetite for US Treasuries ...