The bond market vigilantes are (supposedly) back. And this time, they aren’t just Wall Street traders. America’s foreign creditors are no longer willing to provide endless amounts of long-term credit to the US at low rates. So argues Mark MacQueen of Austin, Texas- based Sage Advisory Services (via Bloomberg):

“The vigilante group is different this time around ... It’s major foreign creditors. This whole idea that we need to spend our way out of our problems is being questioned.”

From all this talk, you would never know that the world is actually still buying record amounts of US Treasuries. In fact, Treasuries are the only US financial asset that the rest of the world is still buying in large quantities. Demand for Agencies -- and asset backed securities -- has fallen off a cliff. Demand for equities has been anemic (though the last data point comes from March). By contrast, the 52 week increase in the New York Fed’s custodial holdings is way, way up. 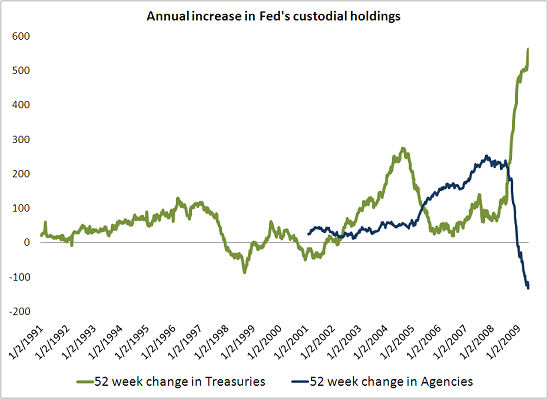 Over the last four weeks of data -- basically the month of May -- central bank Treasury purchases topped $70 billion even as their Agency holdings inched up. That is a big sum, almost a record sum. It implies that the rest of the world is currently shifting their US portfolio into Treasuries, not moving out of them. 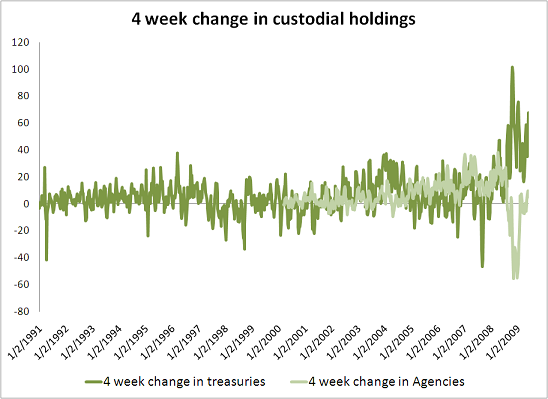 To be sure, not all is well.

Foreign central bank demand is still concentrated at the short-end of the curve,* and the US is issuing  more long-dated bonds.

The Fed’s ZIRP policy combined with stable financial markets once again makes the Dollar carry trade attractive. Since old habits die hard, this should "force" foreign central banks to accumulate Treasury assets - and it has. In this scenario, stable financial markets are now pushing for further reduction in the US external deficit ... And, once again, it looks like much of the world, from the Fed to the Treasury to the emerging market central banks, are resisting the adjustment as it requires continued soft domestic demand in the US to limit imports.

Central banks that effectively peg to the dollar make for a strange kind of vigilante. Countries that do not want their currencies to appreciate have to intervene more when inflows pick up, and they have to invest that money abroad. And if central banks believe that the only acceptable, safe alternative to long-term Treasury notes is short-term Treasury bills, they will end up lending to the US at incredibly low rates so long as the Fed keeps rates low.

Key countries end up piling up short-term Treasury bills at a rate that has to make everyone nervous.

* Central banks bought a surprisingly large share of the 5 year auction, so this may be changing. We will have to see.

The Treasury market, in a world no longer dominated by central bank reserve managers