That would be my summary of the IMF’s latest data on the currency composition of the world’s reserves. My headline -- "record dollar reserve growth and little real evidence of diversification" -- is more consistent with the Dow Jones story on the IMF data than with the Bloomberg story on the same subject.

Of course, my summary is subject to two huge caveats. One: China, the country that matters the most, doesn’t report data on the currency composition of its reserves to the IMF. Two, the Gulf, whose combined official asset growth now trails only China, doesn’t report much data to the IMF, both because the Gulf’s central banks don’t seem to report data on their reserves and because most of the Gulf’s foreign asset growth comes from their sovereign funds.

But the IMF data still paints a stunning picture.

If that is true, total reserve growth -- counting about $75b from Saudi non-reserve foreign assets growth and another $70b from the Chinese state banks and the China investment Corporation CIC - reached $1330b and dollar reserve growth reached an estimated $960b.

In q4 alone, reserve growth -- after adjusting for valuation gains and counting Saudi non-reserve assets and the CIC -- was estimated to be $373b, and dollar reserve growth around $290b.

Official asset growth has basically doubled since mid-2006, as the following chart shows. 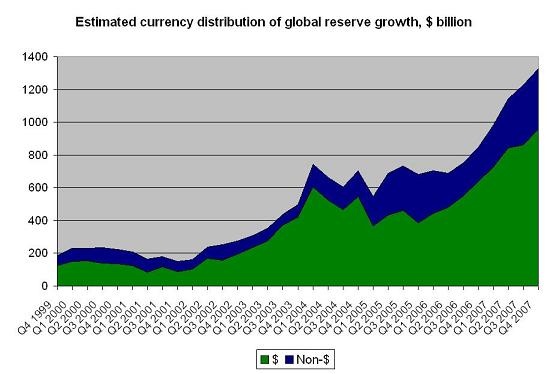 If my estimates for the currency distribution of global reserve growth are close to right, dollar reserve growth (on a rolling four quarter basis) now easily exceeds the US current account deficit. That hints at the possibility that net private capital flows (if they could ever be correctly measured) might now be negative. 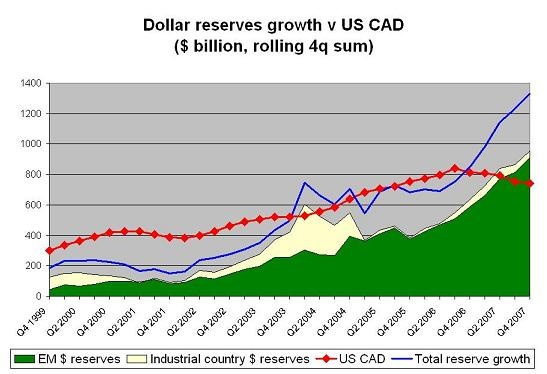 My data on global reserve growth doesn’t include Norway’s government fund or the big Gulf funds, who likely added another $150b or so to their combined assets -- bringing total official asset growth (counting Chinese state banks) close to $1.5 trillion and perhaps bringing dollar asset growth above $1 trillion.

The enormous increase in official assets in 2007 -- and equally large likely increase in dollar holdings -- strikes me a far more significant story than the slight fall fall in the dollar’s share of global reserves.

There is a lot more evidence that excessive central bank demand for dollars is impeding global adjustment than evidence that the dollar is about to lose its status as the world’s leading reserve currency. The dollar’s slide doesn’t seem to have dampened demand for dollars from central banks -- in large part because many want to avoid appreciating against the dollar by too much.

The dollar’s overall share of global reserves (among reporting countries) did slide from 65.7% at the end of q4 2006 to 63.6% at the end of q4 2007. But the main cause of that slide was the increase in the emerging world’s share of global reserves. Reporting emerging economies hold around 60% of their reserves in dollars, relative to about 70% in the industrial economies -- and they added $577b to their reservse relative to $68b among the world’s industrial economies. That alone explains most of the fall in the dollar’s share.

A 0.5% fall in the dollar’s overall share -- especially in a context when the euro’s rise would naturally increase its share of the total absent offsetting moves -- strikes me as of far less significance than the overall acceleration in the pace of reserve growth and the enormous overall increase in central banks holdings of dollars.

Obviously, my estimate of global reserve growth hinges on estimates of what countries that do not report are doing -- they make up over 1/2 -- $690b - of the estimated $1330b overall increase, and $525b of the $960b in estimated dollar reserve growth.

But it is worth highlighting that my estimates assume that they added more to their dollar reserves than the countries that do report. 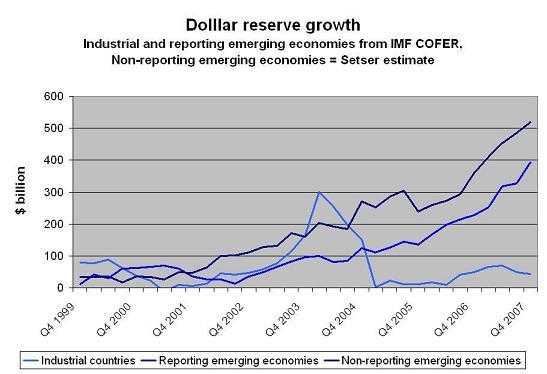 Central banks purchases of euros and pounds clearly has picked up over time, but those purchases are still dwarfed by dollar purchases. 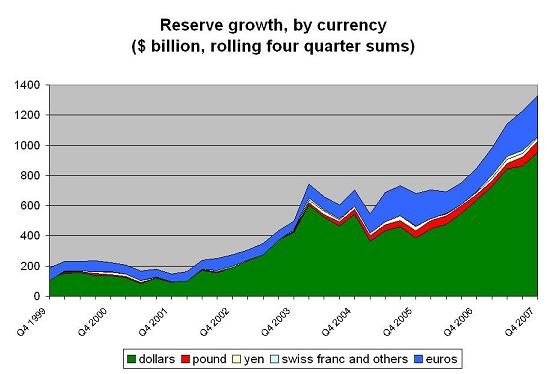 Looking only at the increase non-dollar reserves is useful. Even if the world’s central banks (including those that do not report data to the IMF) basically held the dollar share of their reserves constant, total central bank purchases of euros set a new record. The basic story of 2007 is that central banks were buying more of everything. 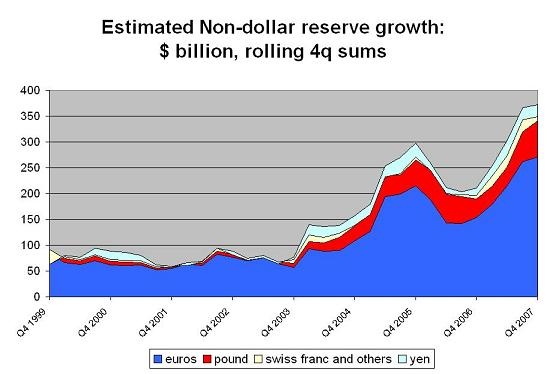 If China was reducing the dollar share of its reserves -- as some data now suggests -- the dollar total would be a bit lower and demand for euros and pounds a bit higher. The amount of pressure that central banks were placing on the euro/ dollar market would correspondingly be higher.

I would say that given the uncertainty around China, central banks likely added between $850 and $950b to their dollar reserves in 2007 and between $250 and $350b to their euro reserves. Total non-dollar reserve accumulation could have been as high as $450b.

Of course, if China’s efforts to diversify added to pressure on the dollar, China was shooting itself in the foot -- it weakened its own currency against the currency of many trading partners (and commodities), adding to inflationary pressures. And since many investors don’t think the RMB’s continued depreciation v the euro is sustainable, it likely added to speculative pressure on the RMB.

Moreover, a fall in the dollar share of China’s reserves would provide European policy makers would then truly have a strong case that Chinese policies worked to push the euro up against both the dollar and the RMB, providing China with a trade advantage.

The official sector’s impact on global markets is now so big that it isn’t unreasonable to start to ask whether big official actors are adding to various pressures in the market. And so long as they refuse to disclose much data, it is impossible to prove that all of the big players have been acting to stabilize the market.

In some sense though it doesn’t matter whether China acted like the reporting emerging economies (who broadly speaking acted to support the dollar by buying more dollars when the dollar was under pressure) or if China diversified its reserves and added to the pressure on the dollar. Even if China reduced the share of its portfolio in dollars, the enormous increase in the pace of its reserve growth in 2007 meant that it clearly added more dollar assets to its portfolio than ever before.

Or, to put it just a bit differently, the bubble in emerging market reserve growth -- and dollar reserve growth -- shows no sign of popping. I hope private capital flows to the US resume before this bubble pops -- and before emerging economies conclude that they cannot provide this much financing to the US unconditionally.

What happened to financial globalization?