Chinese reserve growth has slowed. Russia’s reserves are down in the first quarter (though most of the fall was in January). Saudi foreign assets fell in January and February.

Most emerging economies -- including some that thought they had ample reserves a year ago -- want more foreign currency liquidity. They are looking to borrow foreign exchange pretty much any place they can. Russia, Korea and Abu Dhabi are all poised to issue international sovereign bonds. Other cash-constrained countries (and companies) are turning to China for help, especially if they have a bit of oil or iron ore to offer in exchange. Still others are turning to the IMF.

After several years when plain vanilla Treasuries were out of favor as a reserve asset, demand for Treasuries surged late last year. It fell off a bit in January, but picked up again in February. Moreover, we know that little has changed since then. The Fed’s custodial of Treasuries are up by a stunning $76 billion since the end of February. Central banks were particularly active in the past week. Custodial holdings of Agencies are down by a little more than $8 billion since February.

Foreign demand for Agencies has truly disappeared. Look at the following chart, which shows rolling 12m purchases of all Treasuries and Agencies, includes short-term T-bills and short-term Agencies: 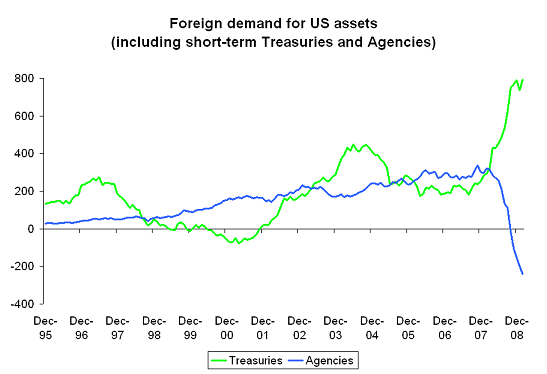 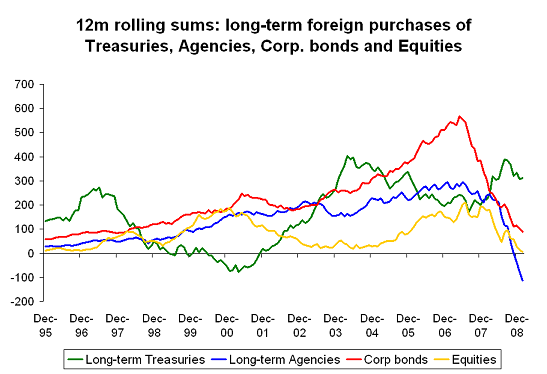 Chalk that sudden stop to the reserve managers at a few large central banks. For a while, Agencies backed by prime mortgages and an implicit government guarantee were almost as toxic to central banks as subprime debt was to commercial banks. The Fed is buying Agencies, but almost no other central bank is.

Treasuries are the only US asset foreign investors still want, despite their low yields. Over the past 12 months, the US -- rather amazingly -- could have financed its trade deficit by just selling Treasuries. And nothing else. At least so long as Americans didn’t move large sums out of the US.

It still could for that matter. The $85.1 billion in Treasuries foreign investors bought in the first two months of 09 (mostly in February) easily exceeds the $62.2 billion January-February trade deficit.*

At some point, though, central bank and flight-to-safety demand for Treasuries will fade. That won’t necessarily signal a loss of confidence in US government bonds. It could equally signal renewed confidence in the Agencies -- or at least an and to the reallocation of existing reserves toward Treasuries.

The fact that the US is financing its external deficit entirely by selling Treasuries understandably makes people a bit nervous. After so much has gone wrong over the past year it is natural to focus on the remaining risks. The sudden loss of foreign confidence in the Agencies is a cautionary tale.

But there are also three sources of comfort:

One, it is far easier for central banks to shift out of Agencies (and large uninsured deposits) and into Treasuries than it is for central banks to shift out of Treasuries. Especially when most countries are looking to increase their holdings of truly liquid assets. China now seems worried about the safety of its reserves, but far more countries worry that they don’t have enough reserves to be safe.

Two, American demand for foreign assets has fallen alongside foreign demand for US assets. That reduces the total amount the US need to borrow from the world.

*We don’t have data on the March trade deficit, and April isn’t over. But the $135.5 billion rise in the Fed’s custodial holdings of Treasuries so far this year seems to be roughly in line with the likely deficit. On the other hand, some of the inflow must be coming out of dollar assets, though less seems to be coming out of the Agency market than in the last half of 2008.

The US doesn’t name China a currency manipulator