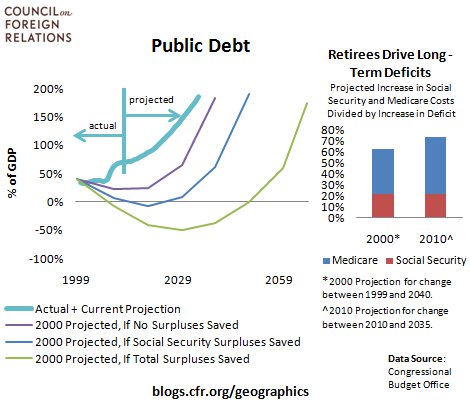 In a major speech on April 13th laying out his blueprint for reducing America’s long-term debt burden, President Obama drew a sharp contrast between the outlook today and the much rosier one a decade ago. In 2000, he claimed, “we were prepared for the retirement of the Baby Boomers.” Yet whereas the national debt burden today, at around 65% of GDP and rising fast, is much higher than it was in 2000, the long-term fiscal path the nation was on was as unviable then as it is today. This is illustrated starkly by the figure on the left. The driver of the sharply rising debt curves was, and still is, retirees – and specifically two programs to care for them, Medicare and Social Security, as shown by the bars in the figure on the right. President Obama is surely right to draw attention to the challenge of funding retiree entitlements. He is on less firm ground, however, in suggesting that the last Democratic administration had a handle on this. 2000 was no Golden Age of preparedness for our Golden Years.

White House: Remarks by the President on Fiscal Policy

Is the President’s Budget Credible?