Gasoline prices are the talk of the town right now. Lots of stories are circulating about where prices are on a historical basis and what this summer might bring. $4 a gallon? $5? Some have predicted even $6 a gallon. Wait, it gets better. You’d think you were at a horse auction the way analysts are talking these days.

Here’s a quick graphical look at gasoline prices, to put things in perspective.

First, good news for people who love bad news about gas prices (which includes environmentalists and Republican presidential candidates—strange bedfellows indeed): average retail gas prices in the United States are higher right now than they ever have been this time of year. That claim is absolutely true.

Figure 1 shows where average U.S. gasoline prices have ranged between 1994 and 2011, according to the U.S. Energy Information Administration (EIA). Over that period, prices this time of year have gone as low as under $0.96 per gallon (in 1999) to as high as $3.19 per gallon (in 2011). This week’s $3.58 is a full 12 percent higher than the next highest year at this time, which occured exactly one year ago. Prices are more than $1 per gallon higher than median February prices between 2006 and 2011. 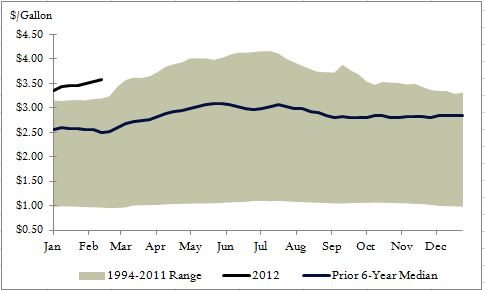 What can U.S. consumers expect to pay at the pump this summer? Here’s a quick back-of-the-envelope calculation. If recent seasonal trends hold, prices would rise by around $0.50 per gallon between January and June. That would mean average U.S. gas prices of just over $4 per gallon this summer. So if history is any guide, $4 gasoline is not only possible this year, it’s probable.

When it comes to gas prices, though, national averages don’t tell the whole story. Prices at the pump vary hugely depending on where you are in the country, for various reasons. Figure 2 shows retail gasoline prices in four U.S. cities: Los Angeles, New York, Denver, and Cleveland. The difference between what you pay in Los Angeles and Denver is staggering. The disparity has only gotten more pronounced the last few months. Kobe Bryant and the Lakers are dropping more than $4 per gallon to fill their tank, while the Birdman and the Denver Nuggets are paying just $3 or so. No wonder things are so bad in Lakerland right now. 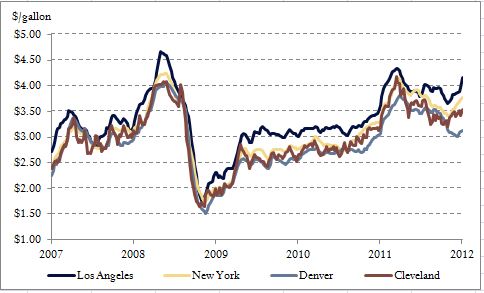 For average U.S. prices to reach $5 per gallon, let alone $6 or more, it would take a pretty serious disruption to the global oil market. Further supply losses in the Middle East could certainly take prices that high, but for now, I’d call that a tail risk: the chances it’ll happen are low, but there’s still a material chance. Tail risks in the oil market are exactly what Wall Street oil traders are bracing themselves for.  In the words of a Citi energy strategist, “We face a bifurcated market: a crisis in the Middle East could send prices through the roof; the eurozone debt problems could trigger a collapse.” The odds favor no major change one way or the other, but traders are assigning a higher-than-usual probability that prices could swing much higher or much lower in 2012.

This isn’t the first time the media has been abuzz with reports that summertime gas prices might reach outrageous highs. Just last spring, people were saying the same thing, predicting $6 gasoline by the summer, only to see prices decline over the rest of the year. But as far as gasoline prices are concerned, 2012 has gotten off to a terrible start.