If Russia were China -- or if Russia’s reserves were growing at the same pace as in late 2007 or early 2008 – today’s revelation that Russia cut the dollar share of its reserves over the course of 2008 would be big news.

The dollar share of Russia’s reserves is now (or at least was in January) a lot closer to 40% than 50%. Reuters (via the Moscow Times, and other sources):

The euro’s share in Russia’s forex reserves, the world’s third-largest, overtook that of the dollar last year as the country pressed on with a gradual diversification, the Central Bank’s annual report showed. The euro’s share increased to 47.5 percent as of Jan. 1 from 42.4 percent a year ago, according to the report, which was submitted to the State Duma on Monday. The dollar’s share fell to 41.5 percent from 47 percent at the start of 2008 and 49 percent at the start of 2007.

But the dollar isn’t the dominant reserve currency along the periphery of the eurozone. Most European countries that aren’t part of the euro area now keep most of their reserves in euros. That makes sense. Most trade far more with Europe than the US – and some, especially in Eastern Europe, ultimately want to join the eurozone.

Russia has long traded far more with Europe than with the United States. By increasing the euro share of its reserves, Russia is in some sense just converging with the norm among other countries on the periphery of the eurozone.

Russia’s announcement also settles one mystery -- or at least one little thing that I have spent a bit of time pondering. The following chart shows the Setser/ Pandey estimates of Russia’s dollar holdings relative to Russia’s foreign exchange reserves. 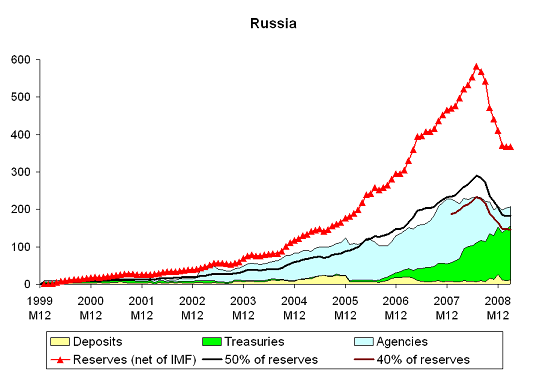 Interpreting the chart requires one additional bit of information. The quality of the data improves around the middle of the year, as the best US data comes from the (June) surrey of foreign portfolio investment in the US. The further from June, the larger the potential error.

Dollar assets for Russia (and China, but that is a more complicated story) were a bit lower than I would have expected in the June 2008 survey. I worried, though, that the survey was just missing a portion of Russia (and China’s) portfolio. Now though I would guess that the survey was more or less right about Russia. The US data then implies that Russia reduced the dollar share of its portfolio in early 2008 …

What of the apparent rise in Russia’s dollar share -- at least based on our simple model -- over the past few months?

Chalk that up to the limits of the US data.

Reuters reports that Russia has "banned investment in bonds of agencies such as Fannie Mae and Freddie Mac, saying it needed more liquid assets to meet the needs of its own budget" and here I suspect the Russians really have backed their words with actions.

An aside: Greg White’s reporting on Russia is always worth reading. The close to 10% y/y fall in Russia’s q1 GDP is a reminder of just how brutal the adjustment in Eastern Europe has been. The fall in output in a host of countries is now larger than back in the emerging market crises of the 1990s.

* The rise in global reserves means that the world’s central banks hold more euros as part of their reserves now than they held dollars in 2000. If demand for dollars hadn’t risen any more, the rise in demand for euro-denominated reserves would be a big story …

** Best that I can tell, South and Southeast Asia generally hold a far lower share of their reserves in dollars than the big countries in Northeast Asia.

The Interim Indian Budget: Jobs Are the Bigger Issue