Few topics are quite as polarizing as the “savings glut.” The very term is often considered an attempt to shift responsibility for the current crisis away from the United States.

That is unfortunate. It is quite possible to believe that the buildup of vulnerabilities that led to the current crisis was a product both of a rise in savings in key emerging markets, a rise that -- with more than a bit of help from emerging market governments -- produced an unnatural uphill flow of capital from the emerging world to the advanced economies, and policy failures in the U.S. and Europe.

From this point of view, the savings glut in the emerging world -- as there never was much of a global glut, only a glut in some parts of the world -- was in large part a result of product of policies that emerging market economies put in place when the global economy -- clearly spurred by monetary and fiscal stimulus in the US -- started to recover from the 2000-01 recession. China adopted policies that increased Chinese savings and restrained investment to try to keep the renminbi’s large real depreciation after 2002 – a depreciation that reflected the dollar’s depreciation – from leading to an unwanted rise in inflation. The governments of the oil-exporting economies opted to save most oil windfall – at least initially. Those policies intersected with distorted incentives in the US and European financial sector – the incentives that made private banks and shadow banks willing to take on the risk of lending to ever-more indebted households (a risk that most emerging market central banks didn’t want to take) to lay the foundation for trouble.

On one point, though, there really shouldn’t be much doubt: savings rates rose substantially in the emerging world from 2002 to 2007. Consider the following chart – which shows savings and investment in emerging Asia (developing Asia and the Asian NIEs) and the oil exporters (the Middle East and the Commonwealth of independent states) scaled to world GDP. 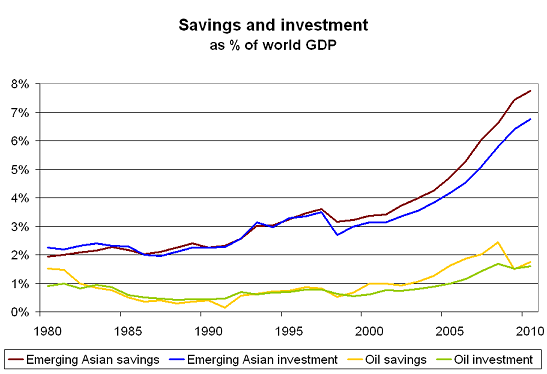 Investment in both regions was way up. But savings was up even more. 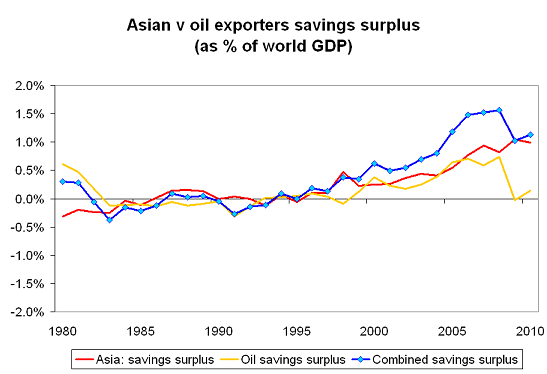 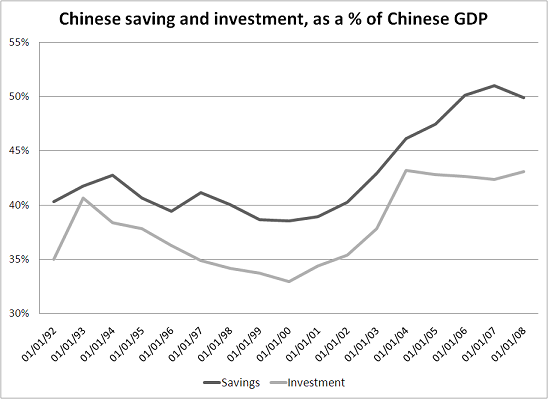 The chart is from Stephen Green of StanChart; used with permission

All my data, incidentally, comes straight from the IMF’s WEO data tables. All I did was to multiply the data on savings rates by regional GDPs and then scale the resulting dollar figure to world GDP in dollars.

That disaggregated data is almost as striking.

It shows, for one, that the “investment drought” argument applies far more to the Asian NIEs (Korea, Taiwan, Singapore, Hong Kong) than to the rest of Asia. Investment in some countries may not have recovered from the 1998 crisis, but the overall data is dominated by the huge rise investment in developing Asia (read China). Plotting the rise in billions of dollars – rather than as a share of global GDP – makes the scale of the rise in investment in developing Asia over the past few years clear. 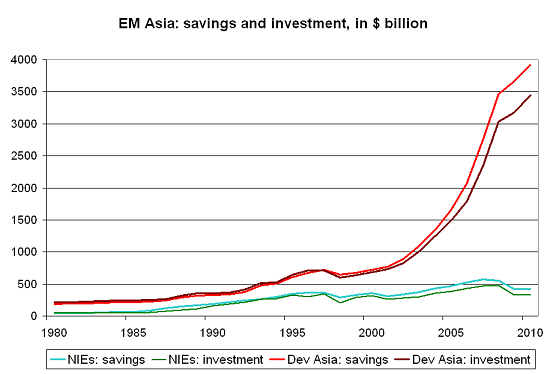 It is also striking that investment in the Middle East was essentially stagnant, in dollar terms, from say 1980 on. That meant that is was falling as a share of world GDP – and certainly falling relative to the Middle East’s population. Comparisons with the “boom” level of 1980 is a bit unfair, but it still isn’t hard to see why the region stagnated when oil prices stagnated.

And it also isn’t hard to see why the region boomed when oil prices soared, as the rise in oil revenue financed a boom in investment. The scale of that boom – in dollar terms – is rather impressive. 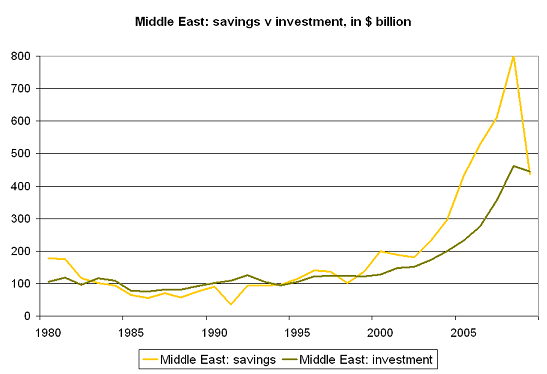 Maybe this equilibrium was a function of excessive demand stimulus by the advanced economies in the aftermath of the last recession – and lax financial regulation that allowed households to over-borrow. High US and European demand allowed the emerging world to save more. Maybe it was a function of policies in the emerging economies, policies sometimes put in place to support undervalued exchange rates. That would explain why the growing US savings deficit didn’t put upward pressure on global interest rates and why the rise in the US external deficit didn’t lead to a rise in US real interest rates -- something would have short-circuited the housing boom. Probably it was a mix of both. Emerging market savers (really their governments, as private savers weren’t exactly seeking out depreciating dollars) helped to provide Wall Street and the City the rope they (almost) used to hang themselves.

No matter. We don’t need to assign responsibility for the imbalances that marked the pre-crisis global economy to know that the chain of risk-taking that allowed emerging market savers to finance heavy borrowing by US households didn’t result in a stable system.

* Policies that increased savings in China include a tight fiscal policy and the reforms that increased the profitability of the SOEs, creating a new source of business savings. No comparable reform was put in place to have the SOEs pay dividends (or to use the dividends to support say a social safety net), so the rise in business savings in effect freed up household savings to be lent abroad (with a lot of help from the state banks and the PBoC). Policies that reduced investment include the rise in the banks’ reserve requirement -- which meant that Chinese banks had one of the lowest loan to deposit ratios in the emerging world going into the global slump -- and more generally the restraints on bank lending. The governments of most oil-exporting economies also saved a large fraction of the oil windfall, especially in 2004 and 2005. Over time discipline waned a bit, but the rise in spending and investment didn’t quite keep pace with the rise in oil prices.