Folks in the market like to talk about what is happening to China’s forward book. Some think that China (or its state banks) sold dollars forward last fall, and, well, to many the (modest) disclosed short position that China reports in the IMF’s SDDS reserves template isn’t all that convincing. In part because the disclosed forward book never changes much.*

But China also quite clearly isn’t the only country in Asia with a forward book. "Shadow intervention" is actually rather common, in both directions.

At the end of August, Korea had bought about $48 billion in dollars forward, up from just under $45 billion in July.** Technically, the forward book may be the forward leg of a swap contract.*** No matter—the rise in the forward book clearly reflects the central bank’s activities in the market.

I like to watch government deposits and government bond purchases too; they are up $1.7 billion (with a big increase in government deposits abroad). Korea’s intervention hasn’t always only appeared on the central banks’ balance sheet (though some of the portfolio debt comes from Korea’s National Pension Service). Sum it up, and Korea’s government could have bought as much as $8 billion in the market in August. 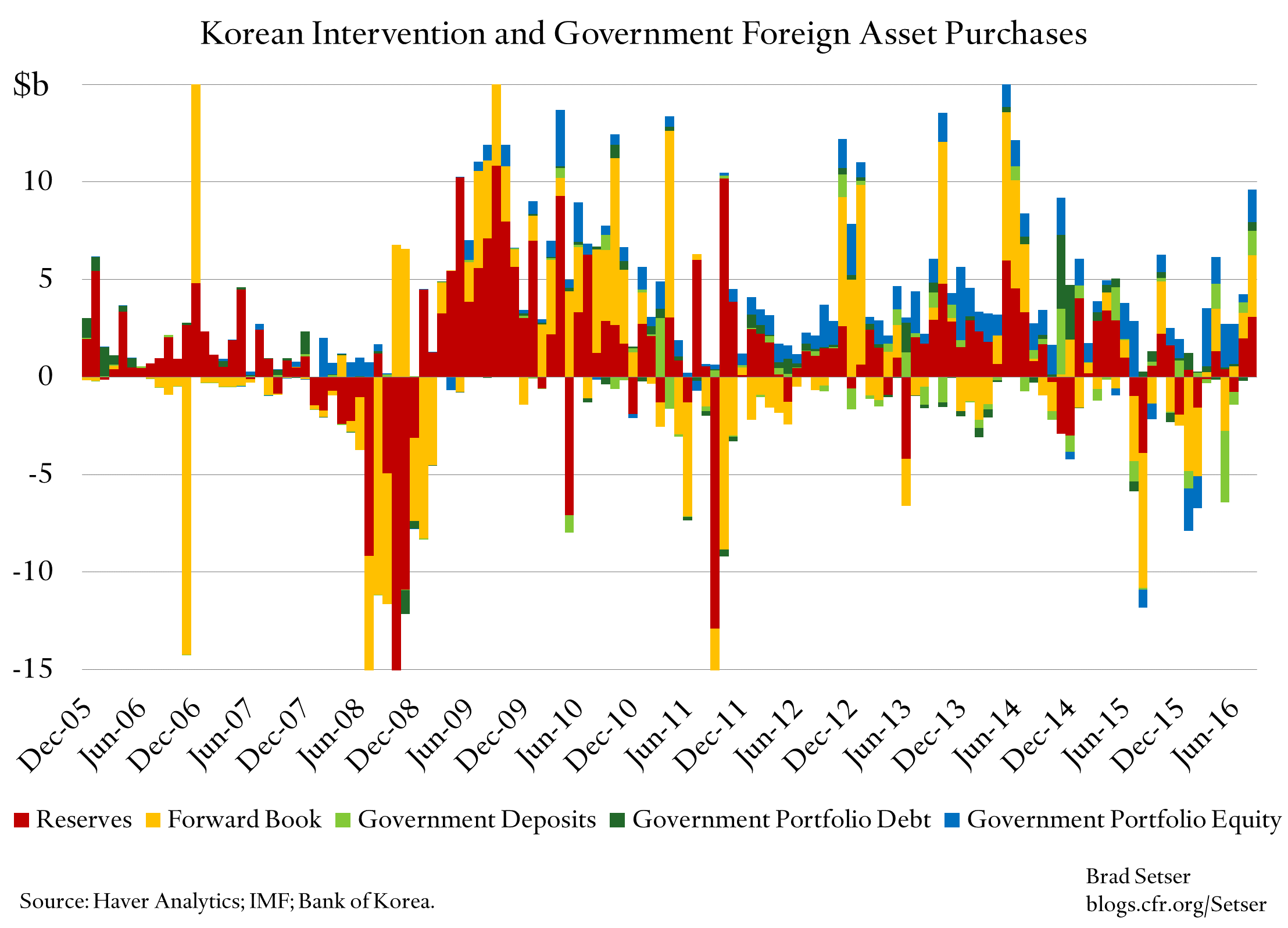 Annualized, that is a 7 percent of GDP pace of purchases (China’s annualized August sales, judging from the intervention proxies, ran 2.5-3 percent of GDP).

It is also the highest pace of purchases since the spring of 2014 (Korea did sell at a faster pace last August, and also clearly was selling earlier in the year).

Obviously it is only one month, and the monthly numbers are volatile. But the scale of the monthly purchases in August also matters; it shows commitment. Reuters reported earlier this week: "traders remained on guard against possible intervention by authorities to stem further gains [in the won]."

And I suspect Korea has made its point to the market (1090 is strong enough, thank you very much), and September’s intervention will be a bit smaller.

Headline reserves for September should be out soon.

Update: Korea’s reserves rose $2.3 billion in September, to $377.8 billion. Valuation changes shouldn’t be a big factor so, based on headline reserves, Korea looks to have continued its reserve purchases. But it is impossible, given Korea’s tendency to also add to its forward book and to increase the foreign assets held in other parts of the government, to know Korea’s full activities in the market from the headline change in central bank reserves alone. See the August data!

* The short position has been a constant $28.9 billion since February (there is no data before that).

** Call me a grumpy old man if you want, but in my opinion the redesigned web page for rediffusion of the national data in the SDDS reserve template on the IMF’s web page has made it more difficult to find (or to find quickly) the national data on forwards (Korea is here, more up-to-date data comes from Korea’s own web page). The old format did not allow online cross-country comparison, but it generally was easy to use for my purposes—the national details were readily available. Now a lot of the data seems only to be available in a cross-country table by indicator. The new presentation of the national data shows headlines reserves and a few graphs (though the time series on the graphs is far too short) —but the real value of the SDDS disclosure comes from the disclosure of forwards and other details, not the headline numbers (which most countries present on their own). It would be a great help if there was a simple way to expand the view on the national pages to include the reserves detail and to download the full historical time series (available in the past as a .csv file—old fashioned, but it worked, without requiring a complex query to the data base).

*** Think spot purchases, with the dollars then swapped for won with the banking system. The reported forward is the forward leg of the swap. The central bank retains the foreign currency risk. The banks get dollar funding.

The ECB on the Slowdown in Global Trade