I didn’t use the term “sudden stop” in my post on the September TIC data release lightly.   The attached graph -- which comes straight from the TIC data -- shows an extremely sharp fall in net purchases of US long-term financial assets over the last three months. 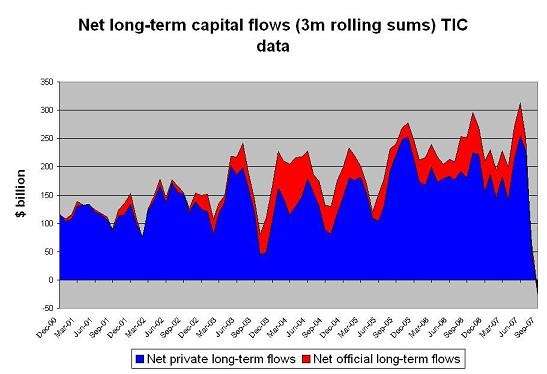 Nonetheless, a range of market indicators -- not the least the slide in the dollar v the euro since the end of September -- do not suggest a strong pick-up in private demand.

The counterpart to weak demand for US asset is record demand for European assets.    The euro’s ongoing rally suggests that this hasn’t changed.

On the other hand, official demand likely has picked up – though it isn’t clear whether or not that will be reflected in the TIC data.   A lot of Asian countries resumed adding to their reserves in October, and both China and the oil exporters – which have yet to report October data – almost certainly added large sums to their official assets.

The inflows earlier in the summer were quite strong – the $300b net inflow in the three months ending in June was more than the US needed to support its roughly $200b quarterly current account deficit.   At the same time, it is hard to sustain a $200b current account deficit for long without any net long-term inflows …