The foreign assets of China’s government are clearly growing very fast. The $75 billion increase in April’s reserves -- more like $82 billion after adjusting for the fall in the value of China’s existing euros -- suggests a very very strong underlying pace of growth. But the reserves data jumps around. A lot.

The most plausible explanation for the fall in late 2007, for example, is that China channeled a lot of the rise in its foreign assets into the banks and the CIC. The same applies to say a month like March. Headline reserve growth was very low -- likely because the banks were asked to meet the rise in their reserve requirement by holding dollars and the transfer of a large chunk of change to the CIC.

In the following chart, I added in estimates of the various ways China likely has stashed funds away -- the rise in bank reserve requirements, the CIC -- to my previous estimates of China’s foreign asset growth. My estimates for the rise in bank reserves come from Logan Wright, and my estimate of the timing of transfers to the CIC are similar to Logan’s estimates. All this suggests -- if this is the right interpretation of the data -- that the underlying pace of Chinese foreign asset growth jumped to around $225 billion a quarter in q1 2008. 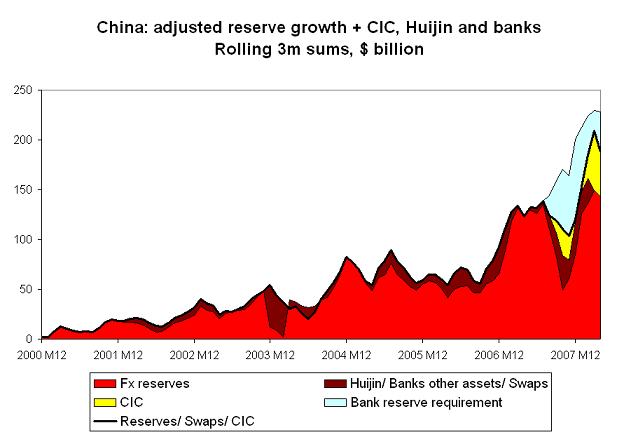 Not surprisingly, a chart showing the the 12m increase in China’s foreign assets (adjusting for valuation effects) shows rapid growth. 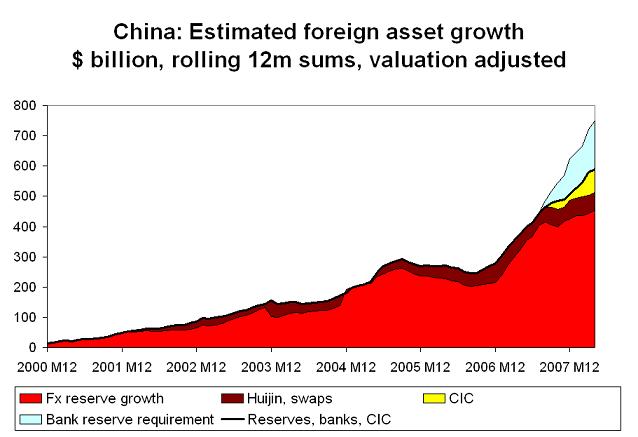 Wang Tao estimates that China shunted $224b billion to the CIC and the banks in 2007.

My estimates are -- not surprisingly, as I admire Wang Tao’s work -- similar.

And as of now, there isn’t much evidence of stabilization. The underlying trend is up.

No wonder outside observers -- and I would hope, Chinese policy makers -- are scared.

There isn’t much evidence though that Chinese policy makers are prepared to contemplate the kind of policy actions that might dramatically reduce incentives for hot money to come into China. Cutting policy interest rates to US levels, for example, would help. But it would also fan inflation. Allowing the RMB to appreciate to the point where investors no longer expected further appreciation would help reduce the incentive to move money into China. But that seems unacceptable to China’s export sector.

China is increasingly boxed in, with no good choices. And its policy response, at least to me, seems to consist of fiddling around the edges -- tightening controls on inflows, loosening controls on outflows, seeing if a slower pace of RMB appreciation helps -- and hoping underlying conditions change. That approach is precisely the approach that got China into its current predicament.

Right now there is little doubt that capital inflows -- FDI and hot money flows, with some hot money disguised as FDI -- account for the majority of China’s reserve growth. The trade surplus and interest income account for maybe $85 billion of the (conservatively estimated) $300 billion increase in China’s total foreign assets through April. FDI explains another $35 billion. That leaves a huge gap. 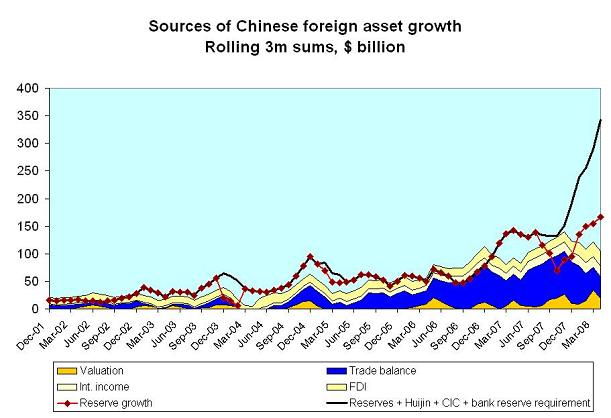 (One note: the graph is on a rolling 3m basis -- so it cannot be directly compared with the year-to-date numbers above)

China’s government isn’t just subsidizing its exporters; it is also offering close to free money to anyone who can get money into China. 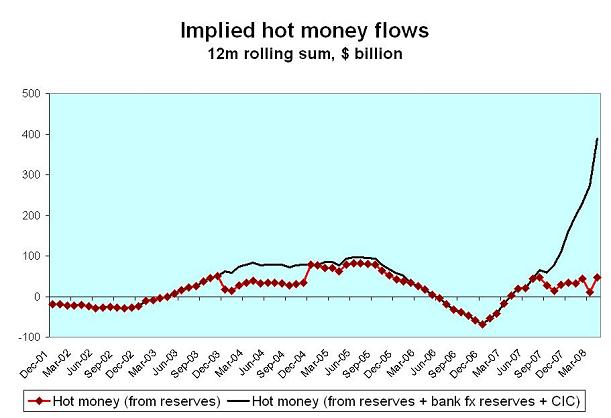 This doesn’t look sustainable. Not to me.

Maybe sovereign funds do use leverage after all