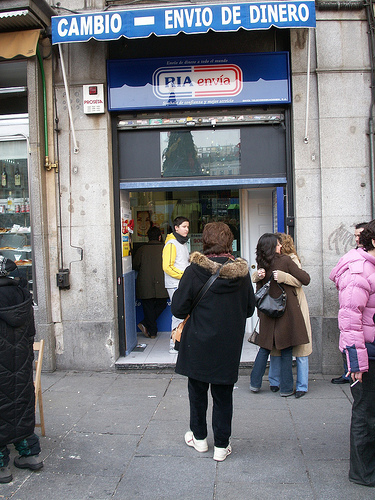 Secretary of State Hillary Clinton’s heads to Mexico today. The main issue on the agenda with Mexican President Felipe Calderon and Foreign Minister Patricia Espinosa will undoubtedly be security. The rising power and violence of Mexico-based drug trafficking organizations (DTOs) covers the front pages of newspapers throughout both countries, and is a priority for policymakers in both capitals. Yet as these two nations focus on their mutual security, the United States should not forget about other bilateral issues – in particular immigration. This is an important topic in and of itself, and perhaps the most important issue on the bilateral agenda for Mexico. But it is also intrinsically related to security. Immigration reform would boost U.S. and Mexican efforts to lessen the reach of the drugs cartels’ on both sides of the border.

The drug cartels’ operations are fueled by one thing: money. This money buys guns, buys people, and buys power. The vast majority of this money – estimated at some $15-20 billion dollars a year - comes from drug sales in the United States. These profits are then sent back to Mexico, and fuel the insecurity and violence.

Mexican immigrants also send back large amounts of money - about $25 billion in remittances every year – to aid their families and help support their communities. This occurs mostly through money transmitters such as Western Union or through informal mechanisms such as “viajeros”—individuals who travel between countries carrying remittances in cash. Many immigrants use these means – rather than formal bank accounts - because they are underregulated and therefore less threatening to those without documents. U.S.-issued personal identification cards are not usually required and few questions are asked.

These same characteristics make these systems attractive to DTOs. The U.S. government, through the Department of Homeland Security as well as through state and local efforts, is beefing up efforts to target these flows. DHS is focusing more resources on bulk cash smuggling, sending 360 more officers and agents to the border as part of a recently launched multi-agency $700 million dollar plan. In one week in March DHS seized $4.5 million in south-bound bulk cash on the border. On the state level, Arizona in particular has been very active. Attorney General Terry Goddard has brought seizure warrants against suspect money transfers, and between 2003 and 2007 has seized over $17 million through intercepted wire transfers. Nevertheless, these are paltry fractions of the money heading south. Drug profits mingle among and are camoflouged by the steady stream of remittances sent by Mexican migrants in the United States. Finding the DTOs funds among the billions sent every year by millions of people without proper documentation in the U.S. will remain a huge challenge.

Immigration reform would alleviate in part this security challenge. While legislators differed in recent years over various issues, every realistic immigration reform proposal presented includes a process for undocumented immigrants to step forward and undergo background checks in order to receive proper documentation. This process would, first of all, help authorities identify criminals among the undocumented immigrant population. It would also facilitate migrants’ access to formal banking, and in the process help separate legal and illegal money flows and transactions. Bringing the United States’ over 11 million undocumented immigrants out of the shadows would limit the DTOs main monetary hideout.

Immigration reform would also cut into DTOs profits in other ways. As the border tightened and the cartels’ territories changed, many DTOs diversified their businesses beyond drugs into kidnapping, extortion and other types of smuggling – including people. The tighter border means would-be immigrants are increasingly using coyotes, or smugglers, to help them cross, and in the process funding these criminal organizations. The rates charged by smugglers have climbed precipitously in recent years from about $500 to close to $3,000, and there are also reports that some force migrants to carry drugs with them as part of their payment. An immigration reform that recognizes the supply and demand forces in the bilateral labor market, and provides a legal means for Mexicans to enter the United States would cut back on this flow of illegal entries, again hurting the profits of the drug cartels.

Finally, a recent Departmant of Justice Report shows that Mexican DTOs have established networks in over 200 U.S. cities. This distribution chain – the anchor of their business – thrives in part because these nefarious elements can hide among a larger population forced to live underground. Fearing deportation, undocumented individuals are unlikely to contact the authorities about suspicious activity, to report crimes, or to step forward to cooperate with U.S. authorities. Immigrants’ marginal status in the United States gives many criminals refuge.

As Mexico becomes a foreign policy priority, the Obama administration should not lose sight of the broader bilateral relationship. A myopic focus on security will not only limit a much broader agenda, but it will hinder the very efforts to improve security. Issues of security, immigration, trade, the environment, and infrastructure are interrelated, and success in one area will remain dependent on success in the others.