Skip to main content
Secrets of SAFE: A trillion of Treasuries here, a trillion there and pretty soon you are talking about real money ...

China has $1946 billion in reserves. The PBoC had another $185 billion in “other foreign assets” at the end of November. Given the fall in China’s reserve requirement, now likely has maybe $160 billion and perhaps less. The PBoC therefore already manages a portfolio in excess of two trillion dollars. The CIC has around $90 billion (less if it marks to market) – as it spent $67 billion acquiring Huijin (China’s existing bank recapitalization vehicle), $20 billion recapitalizing the CDB, $3 billion of China Everbright and $19 billion on ABC. The state banks have at least another $100 billion in foreign assets. Sum it all up and the foreign portfolio of China’s government is north of $2.3 trillion.

Consequently it should be a surprise that China’s government now has close to a trillion in Treasuries. OK, not quite a trillion. But darn close. $860 billion or so at the end of November and – if current trends continue -- over $900 billion at the end of December.

China also has $550 billion or so of Agencies, which are effectively now backstopped by the Treasury. That works out to an enormous bet by China’s government on US government bonds.

These are just a few of the conclusions of a new paper, China’s $1.7 trillion dollar bet, that I co-authored with the CFR’s Arpana Pandey.

This paper presents detailed estimates of the growth of China’s foreign portfolio, taking into consideration the increase in China’s hidden reserves. The story is here is simple: China’s reported reserve growth from mid-2007 to mid-2008 understates its actual reserve growth, as the government forced the banks to hold dollars to meet a portion of their reserve requirement. There isn’t any real doubt about this; the PBoC’s reported an enormous increase in its “other foreign assets.” These hidden reserves are now coming down; China’s reported reserve growth now somewhat overstates the true pace of its reserves growth.

The more innovative portion of the paper presents a detailed portrait of the evolution of China’s portfolio over time.* Our estimates of China’s US portfolio are the result of a lot of detective work. China’s recorded US purchases have – until recently – clearly understated China’s real purchases. The challenge was working out a way to estimate, China’s true purchases using the US data. 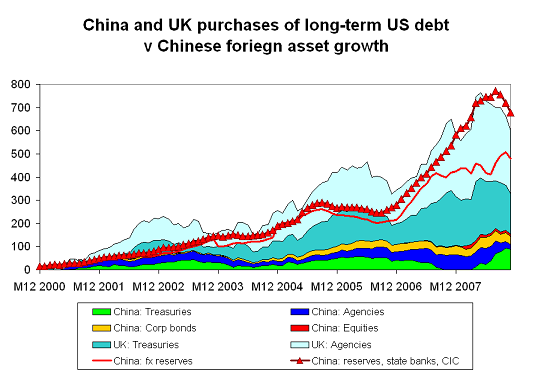 The United States’ annual survey of foreign portfolio investment confirms this; every year the survey leads to large downward revisions in the UK’s holdings of Treasuries and large upward revisions in China’s holdings. This shows up clearly in a plot of countries Treasury holdings over time. 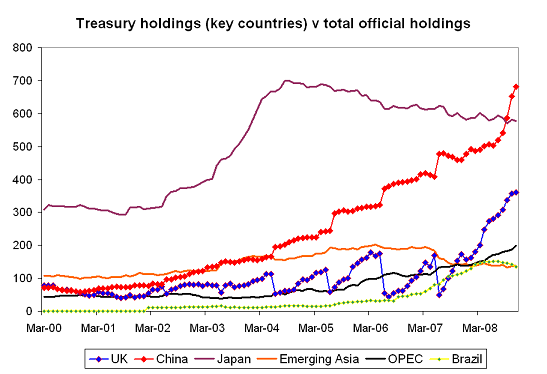 If the US Treasury produced a similar data series for Agencies, it would show a similar pattern. Trust me on this.

The sum of China’s recorded holdings and the UK’s holdings ($1050 billion at the end of November) offers a pretty good upper limit for current Treasury holdings. For a more refined estimate, add the change in the UK’s holdings since the last survey to China’s reported holdings. And to improve on that, assume that the revisions associated with the next survey will match the revisions associated with the last survey. The June 2007 survey reattributed 60% of the rise in the Treasury holdings of the UK and Hong Kong to China. We assumed the next survey will produce a similar adjustment … **

The resulting model – no surprise – shows a big recent jump in China’s Treasury holdings. And a noticeable dip in its Agency holdings. Dean, Areddy and Ng nailed this story. Last fall China lost confidence in any US debt that doesn’t have explicit US government backing. 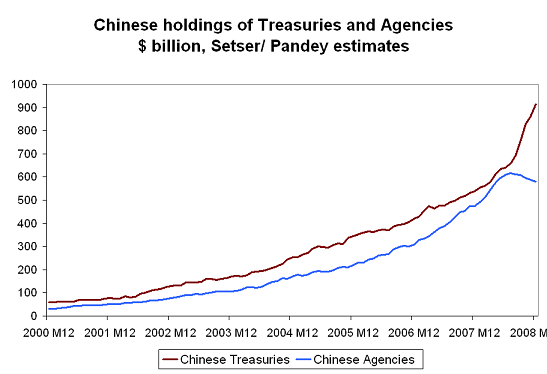 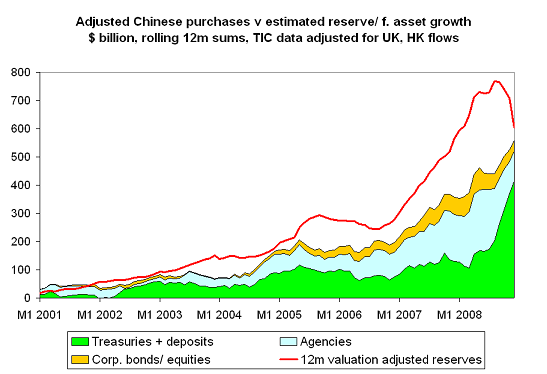 A couple of additional comments:

The fall in China’s purchases from mid-2003 to mid-2004 is no accident. China almost certainly reduced the dollar share of its reserves to around 70% at some point between the June 2003 survey and the June 2004 survey. The very strong growth in China’s current US holdings likely is a bit overstated. The rise in China’s Treasury holdings is very real. But some of that rise is likely explained by a decline in China’s holdings of other kinds of US assets, and it isn’t clear that we have picked up all of the fall. 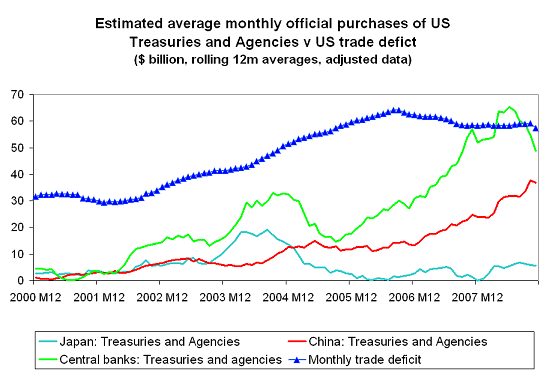 The same data can be presented as a rolling 12m sum. I find it hard – based on this analysis – not to think that Chinese demand had no impact on the US fixed income market. Chinese purchases steadily increased over time. And over the past 18 months, they have been huge … 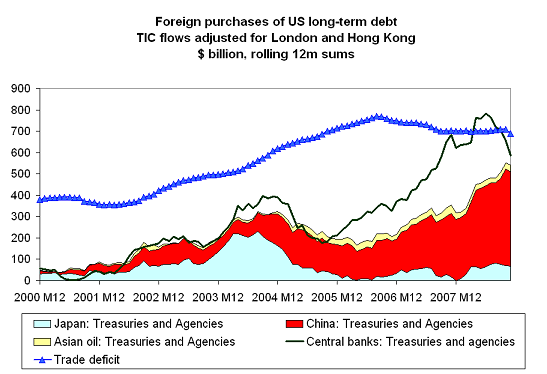 I get a sense the level of concern about China’s financing of the US has increased significantly. Some of that reflects the fact that the US Treasury data now shows that China now holds more Treasuries than Japan. There also is a sense (inaccurate in my view) that the huge increase in the Treasury’s borrowing implies more borrowing from China. Many now argue that the US needs to refrain from criticizing Chinese policies is dislikes in order to assure continued Chinese demand for US debt. That, incidentally, is evidence that China already holds enough debt to influence US policy – the overarching assumption is that other buyers wouldn’t step in if China stepped back. At least not at the same price.

I have spent a lot of time trying to track China’s portfolio – and almost as much time thinking about how China might try to turn the United States’ need for Chinese financing into political leverage. And strangely enough, I am a bit less worried than before.

Perhaps that is because China actually surpassed Japan as the United States largest creditor – counting its holdings of Agencies – a long time ago. 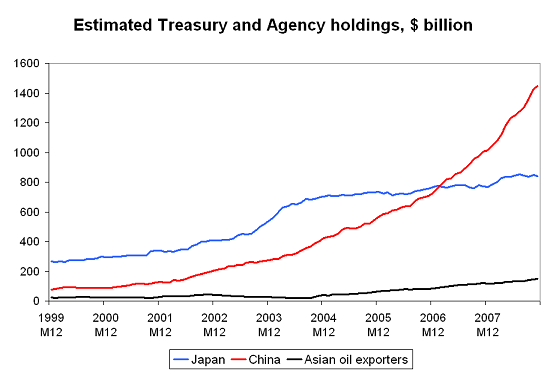 Perhaps it is because I no longer find China’s portfolio to be quite the mystery it used to be.

Perhaps it is because China’s current portfolio choices appear driven by a desire to avoid (RMB) losses, and so long as China pegs to the dollar, holding Treasuries poses few risks. Remember that in RMB terms, China’s pound, Australian dollar and Korean won portfolios have not performed well recently. And central banks tend to look back not forward.

Perhaps it because both the United States’ trade deficit and China’s reserve growth are coming down. The recent surge in China’s Treasury holdings reflects a reallocation of China’s US portfolio more than anything else. Once that reallocation is done, SAFE’s Treasury purchases will slow – independently of the words Treasury Secretary Tim Geithner uses to describe China’s policy of intervening heavily, if necessary, to maintain the RMB’s current value against the dollar. So long as China is running a current account surplus it will be financing the world, but that outflow will not be channeled through China’s central bank.

But above all it is because I was extremely worried in the past.

It felt like the US was living on borrowed time, with a large external deficit than clearly could not be financed in the private market.

And now, well, demand for dollars has rematerialized even as the fall in US consumption has reduced the United States’ need for foreign financing. Oil’s fall also really helps. The trouble spots – it seems to me – are now those emerging markets with large financing needs and limited reserves …

Do let me know what you think of our paper.

* The estimates for China’s total foreign portfolio were produced entirely using Chinese data. With a bit of math, it is easy to estimate the purchases of US assets that would be needed for China to maintain a constant dollar share of its overall portfolio. The estimates for China’s US portfolio were produced entirely using US data. And what’s more, they more or less match my estimate – based on the Chinese data – for China’s dollar portfolio. That makes me think, immodestly, that the methodology Arpana and I developed to track the evolution of China’s foreign portfolio really works …

** China accounted for well over 100% of the UK and HK’s purchases of long-term Agencies in the last survey (this is possible if China is buying some of the existing private stock). We assumed it will account for a bit lower share in the next survey. This is a judgment call – one which no doubt was influenced by our knowledge of China’s total reserve growth. Mechanically applying the model was producing too large an increase in China’s portfolio.

**** To be clear, China as a whole is still running a large current account surplus and thus providing substantial financing to the world. Right now though China’s surplus is financing the build up of private Chinese claims on the world (i.e. offshore bank deposits) rather than Chinese reserves.

A truly global slump. Do not look to the emerging economies for good news ...