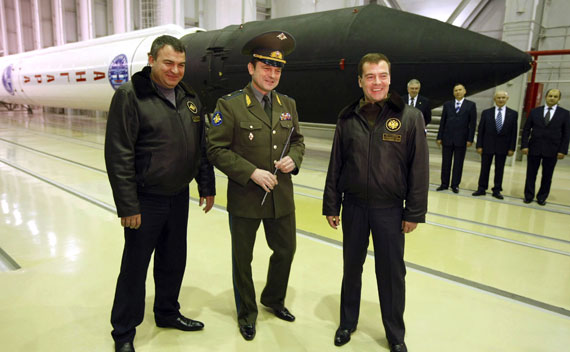 Just as the prospects for the New START Treaty started to look good, they no longer do.  Josh Rogin reports that Sen. Jon Kyl (R-Ariz.) just drew a line in the sand:

Kyl said Tuesday he still doesn’t think there’s enough time to complete work on the treaty this year and that he will try to defeat the treaty if it comes up during the lame duck session. “I let the majority leader know that’s an issue for a lot of my colleagues,” Kyl told reporters Tuesday. “And if he does bring it up, I will work very hard to achieve that result, namely that the treaty fails.

We will see in the next ten days whether Senator Kyl is William Travis at the Alamo or Gen. Anthony McAullife at the Battle of the Bulge.

The other interesting  news in Josh’s post is that New START opponents may try to amend the treaty as a way to kill it.  Their target will be the treaty’s preamble, which notes that an interrelationship exists between offensive and defensive weapons.  Although this is a factual statement and not a constraint, some treaty opponents argue that the language limits the U.S. ability to build missile defenses.  Opponents calculate that an amended preamble would be unacceptable to the Russians, thereby requiring new negotiations or prompting Moscow to walk away from the treaty entirely.

Such a “killer amendment” could be very difficult for the White House to fend off during a lame-duck session.  The White House has insisted all along that the preamble is not binding.  If that is the case, opponents will argue, why would anyone object to deleting the language about defensive arms or adding new language unambiguously asserting the U.S. right to build missile defenses as it sees fit?  The White House thought it could avoid this problem because Senate procedure traditionally forbid amendments to preambles.  But the Senate parliamentarian recently ruled that there was no basis for this rule.  So amendments are welcome.

The Senate has killed more than forty treaties over the past 200 years under the guise of improving them.  The first treaty consigned to the ash heap of history in this fashion was the King-Hawkesbury Convention with Great Britain in 1803.  (Don’t ask.)  The best-known use of killer amendments came during the debate over the Treaty of Versailles, when Sen. Henry Cabot Lodge decided that the best strategy to kill Woodrow Wilson’s handiwork was to “proceed… by way of amendment and reservation.”

Sometimes the best strategy in politics is not to confront your opponent head on but to offer to help him.