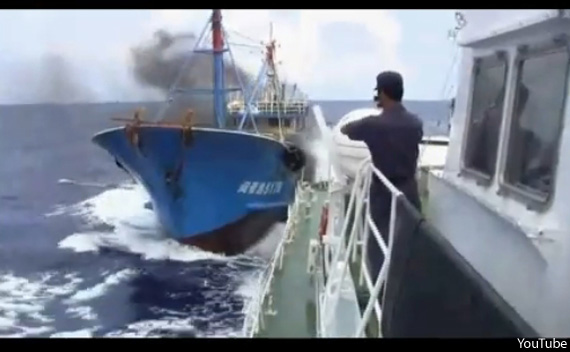 As Washington discusses the Obama Asia tour, Tokyo remains consumed with the politics of the Senkaku incident. Last week, I reported on the unauthorized release of video clips of the Chinese trawler’s collisions with the Japanese coast guard. It turns out that the mysterious sengoku38, the author of the video leaks on YouTube, is a 43-year old coast guard officer. Thus, the debate now centers on who bears responsibility for the loose handling of the secret tapes, and indeed over the definition of what constitutes a state secret in Japan.

First, there is the familiar and political question of who will take the fall. The opposition political parties are determined that someone must resign—the more senior, the better. The ruling party is determined that the investigation of when and how the leak occurred, including the timing relative to their decision NOT to allow the video to be aired publicly, be completed before any fingers are pointed. Implicit here is following the chain of command within the coast guard upwards to see where oversight was lacking. Opposition party members stayed away from Diet hearings last week to demonstrate their willingness to disrupt the legislative process, an effective tactic to hold hostage the much-needed supplementary budget as it was being debated on the floor.

Turbulence is likely to continue until the Kan government decides who will take responsibility for the incident. A vote of no confidence in the Kan government was tabled in the Lower House, only to be rejected by the Social Democratic Party (SDP), the coalition partner of the first Democratic Party of Japan (DPJ) cabinet led by former Prime Minister Yukio Hatoyama. Although the SDP no longer belongs to the governing coalition, it has many interests in common with the DPJ, including a strong distrust of powerful bureaucrats who are suspected of undermining DPJ reform efforts. The Komeito Party joined the fray by announcing it had no intention of joining the DPJ to facilitate passage of the budget bill. The DPJ has enough clout in the Lower House to pass the budget bill, but now it will face a more divided Upper House where the DPJ will be hard-pressed to find friends. Here the opposition leadership has announced it will pursue the effort to force a resignation out of the government for the mishandling of the video. The target? The cabinet secretary or even the prime minister himself. The likely resignation? The minister for Land and Transportation who officially overseas the Japanese coast guard. The commandant of the coast guard, a lifelong civil servant, may also be forced to resign if political pressure becomes too strong.

But the longer-term, and perhaps more important issue, is the state of Japanese secrecy laws, and the government’s ability to enforce them. The prosecutor’s office has decided not to prosecute the Japanese coast guard officer who leaked the videos. Their reasoning is that the video was not properly identified by the coast guard authorities as “secret.” Early on, the video tapes that recorded the Chinese trawler’s interactions with two Japanese coast guard vessels was transferred from the Ishigaki command in Okinawa via the Coast Guard Academy to its headquarters in Tokyo. At the academy, videos of coast guard interactions with vessels had long been used in training and teaching, and access to these videos was available to virtually all coast guard personnel. Thus, past practices of handling video footage taken by Japan’s coast guard did not sufficiently treat these videos as government secrets.

A second and more troubling argument circulating in the deliberations over whether to prosecute sengoku38 was the huge discrepancy between the public attitude over the release of the tapes and the government concern over their handling. For many in Japan, these tapes ought to have been made public from the start, and the argument that the Kan government had made the wrong decision in keeping this information from the public seems to have won the day. The possibility that the Chinese fishing captain who acted so recklessly went free while Japan prosecuted a member of its own coast guard for leaking the videos was troubling to many.

In the end, this case has broader implications for the Japanese government. It raises some very important questions about the determination of what constitutes government secrets and the appropriate system of protecting classified data in Japan. The National Civil Servant Code stipulates that any government employee who publicizes information learned while on the job is guilty of criminal offense. But the regular leakage of all sorts of information to the Japanese media suggests that many government employees do not feel this constitutes a breach of their professional duties. Moreover, since most democratic societies have a healthy dose of government officials who do talk “off the record,” a more enforceable definition of what constitutes classified information surely is required. This is a debate that many in postwar Japan have resisted, and it remains very difficult to enforce existing laws, let alone craft new and stricter ones.

A second, and related, point is that this entire debate raises some important questions about the boundaries of governance and politics in Japan. The coast guard officer who leaked the video is now being identified as a “whistle blower”—and indeed, by some conservatives, a “patriot”—by those who are critical of the Kan cabinet’s handling of the issue. Yet what is the role of “whistle blowers” in today’s volatile Japanese politics? What are the ethical boundaries being developed here between those in government civil service who disagree with their new political leadership? Legally, the prosecutor’s office has determined that this case does not warrant criminal prosecution because of the laxness of secrecy standards within the coast guard on this kind of material. Yet, as Japan moves away from a single-party dominant system, the incentive to “play politics” over national security seems to be growing.

Thus, some serious questions remain, questions that will be asked in bureaucracies beyond the Japanese coast guard, and indeed in Washington where many who work on the U.S.-Japan alliance are concerned about how this debate might affect Japan’s ability to work on security cooperation issues. This is not the first time the Japanese government has had to address a case where a government official has improperly handled what should have been classified data. Yet, this is clearly a case with political intent. Sengoku38’s leak was deliberate, and was motivated by his opposition to a decision made at the highest level of government. Can the Japanese government effectively design a process of ensuring the confidentiality of its internal deliberations if it does not improve its definition of what constitutes classified and unclassified material? Equally important, can the opposition political parties recognize that the politics of the moment may need to be put aside in order to build a reliable process of internal deliberation and consultation over issues of national security—no matter which political party is in power?