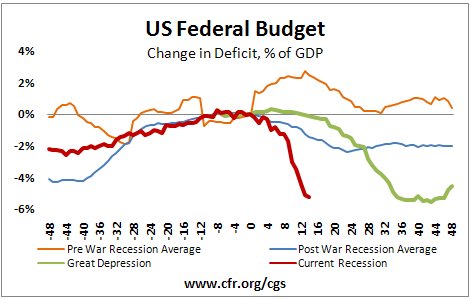 The current downturn is now sharper than most post-war recessions. Comparisons with the depression are rising, but there are important differences too. The policy response has been quicker this time. The federal budget deficit has expanded much more quickly than during the Depression, reflecting government bailouts and stimulus. In the current downturn, it took only about 12 months for the U.S. budget deficit to decline by more than 5%, while during the Depression it took nearly three years to do so. The hope is that bold government action can prevent a rerun of the 1930s.

CFR Symposium: A Second Look at the Great Depression

Romer: Lessons From the Great Depression for Economic Recovery in 2009

Shlaes: FDR Was a Great Leader, But His Economic Plan Isn’t One To Follow