The most recent Pew Survey on European attitudes (summary table below) shows that support for the European integration project is dropping.  My colleagues at CFR are far more able than I am to address the broader political ramifications of this shift.  A few points though on the link between economic growth, public opinion, and support for the European reform agenda. When this was released last month, the German press had a field day with the message that Germany shouldn’t bail out rich southern Europeans.  There was pushback:  it was noted that if means rather than medians were used, Germany would be in the middle of the pack (reflecting a more skewed German income distribution).  Further, the high proportion of renting rather than buying homes in Germany means more housing wealth is off the household balance sheet.  Broader measures of national wealth, including capital, restore Germany to the top ranks in terms of income.

The Pew survey (taken before the release of the chart), conversely shows Germans still support the European project, and are willing to pay to support it.  (By 52 percent to 45 percent, Germans support bailouts for countries in crisis, compared to 40 percent in favor in France.)  It remains to be seen, though, whether the chart below and the pessimism reflected in the Pew Survey resonates with less affluent German voters already suffering from bailout fatigue. 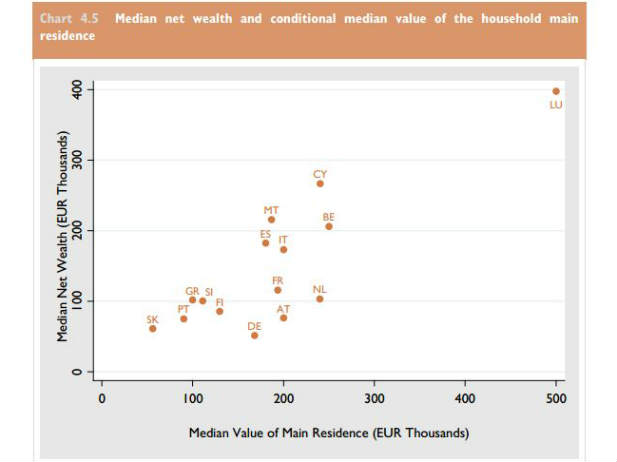