The Wall Street Journal delivered some disturbing news yesterday: South Korea “sharply boosted imports of Iranian crude” in April, buying 42 percent more than a year before, and 57 percent more than in March. Analysts have speculated as to whether Seoul was attempting to sneak in extra oil before European sanctions begin to bite. A more careful look at the data, though, suggests that the spike in Korean imports is less peculiar than meets the eye.

Oil imports naturally fluctuate from month to month. The big question, then, is how anomalous the jump in Korean imports from Iran is. The figure below shows monthly Korean oil imports from Iran going back five years (all data in this post is from Korean customs). It is clear that month-to-month import levels are volatile. 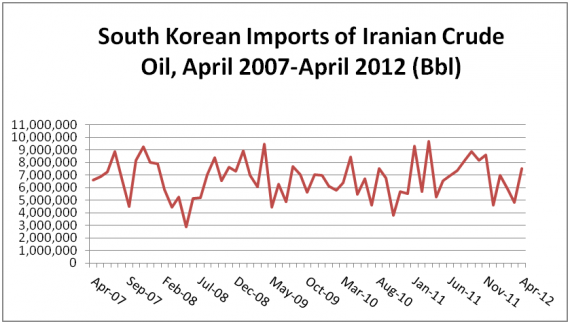 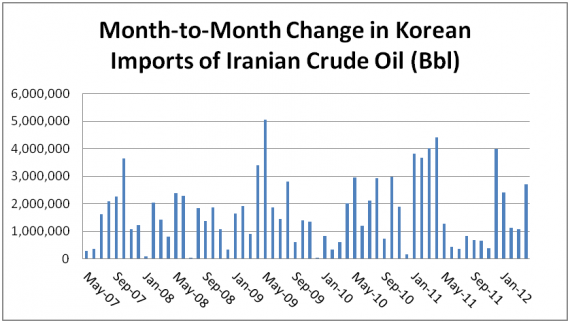 One can, however, ask the question another way. South Korean imports from Iran have been on a downward trend. April imports, then, should have been lower than March ones. Working from this baseline, the actual April figure looks like a bigger jump. I looked at the absolute difference between monthly oil imports and what one would have expected had the previous six months’ trend held up. Korean imports in April now look a bit more anomalous. Had imports followed their six month trend, we’d have expected them to hit 3.4 million barrels in April; instead, they clocked in at 7.5 million. Our data suggests that this sort of aberration should happen four percent of the time, or once every two years.

There’s a risk in doing too many statistical analyses (one of them will invariably deliver a phantom result), but let me give you one more way of looking at the trend. Korean imports from Iran dropped by four million barrels between September 2011 and March 2012, or about 700,000 barrels a month, before rising by 2.7 million barrels between March and April. That jump, then, was four times the monthly trend, in the reverse direction. That looks big, but it turns out to be pretty common: it occurred in 20 of the preceding 53 months.

The big test will be what happens in May and June. The Korean government announced earlier today that it expects to report that imports decreased in May. If it does not, and imports stay high, it will be much more difficult to dismiss the April data as an anomaly. After all, very loosely speaking, the odds of something that happens four percent of the time happening twice in a row is about one in five hundred.  If imports do drop, though, the current kerfuffle should go away. But be warned: normal statistical noise means that this sort of scare will be repeated as the sanctions continue. Better and more timely data, along with a clear sense of what constitutes an acceptable import pattern, would go a long way to keeping the sanctions on track.