During his visit to Seoul on February 4, PRC Defense minister Chang Wanquan is reported to have raised objections with South Korean counterparts to the potential deployment of a THAAD (Theater High-Altitude Area Defense) battery  to South Korean territory, and Xi Jinping reportedly raised the issue during his July 2014 summit meeting with Park Geun-hye.

But North Korea continues to improve its missile capabilities, with its February 8 test of a new anti-ship missile coming four days following Beijing’s latest request to Seoul to refrain from bolstering its missile defense capabilities.  Even prior to North Korea’s latest test, JoongAng Ilbo had it right when it argued that the THAAD decision is a sovereign decision of South Korea and that Beijing should spend more time countering North Korean nuclear ambitions than providing unsolicited advice on South Korean defense matters.

According to South Korea’s Ministry of National Defense, the DPRK conducted 19 separate missile tests involving over 111 projectiles in 2014, a substantial increase in the number of tests compared to 2013.  North Korea’s 2015 missile testing season appears to have begun early with the February 7test, and North Korea’s increased  frequency of testing shows that North Korean sees the tests both as a form of protest against U.S.-ROK joint exercises and to enhance its own capacity to threaten South Korean assets by increasing the range and accuracy of its launch capabilities. 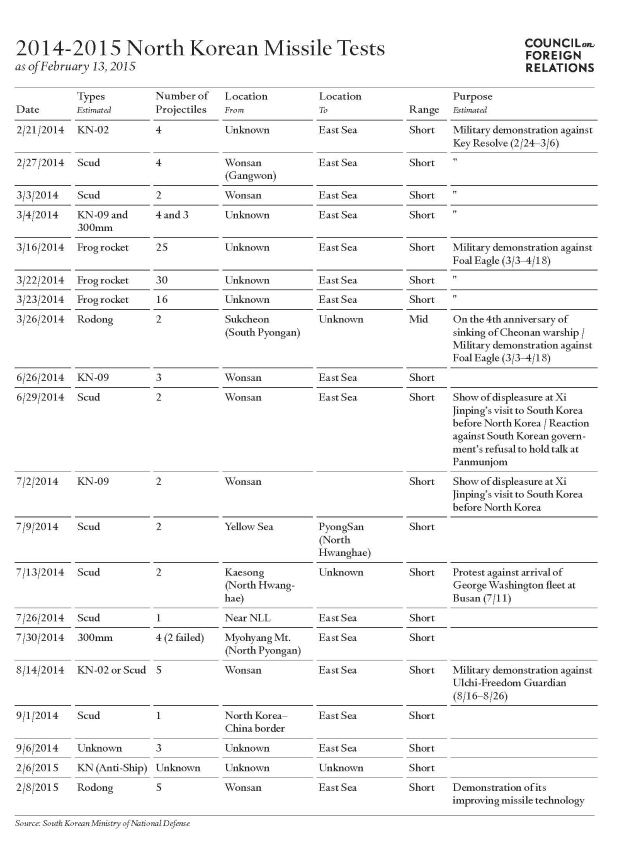 It is this increased threat from North Korea that has led to USFK Commander Scaparotti’s call for deployment of THAAD as a force protection measure for U.S. troops and has apparently catalyzed informal (but not official) discussions between the United States and South Korea regarding the introduction of THAAD to the Korean peninsula.

Another dimension of the THAAD debate in South Korea, as I have written here previously, is related to South Korea’s own desire to enhance its indigenous missile defense capabilities through the development of a Korean Area Missile Defense system (KAMD) that is part of South Korea’s efforts to build a capability to preempt any sign of an imminent unconventional attack from North Korea.  A complicated dimension of this debate relates to South Korea’s own procurement decisions, which will require the ROK to decide whether KAMD can be developed in time to provide the needed protection from North Korean advances in missile capabilities resulting from the upswing in North Korean testing.

Given the glaring fact that both North Korea’s commitment to improving its missile capabilities and South Korea’s assessment of its own missile defense needs—regardless of whether they are met through indigenous production or through procurement—are beyond China’s control, China’s campaign in opposition to the introduction of THAAD on the Korean peninsula is simultaneously perplexing and revealing.

It is perplexing because such heavy-handed Chinese tactics involving demands by South Korea to refrain from taking self-defensive measures in the face of a clear and expanding danger from North Korea are counterproductive to the building of trust between China and South Korea despite the apparent upturn in the relationship under Park Geun-hye.

In the end, China’s effort to force South Korea to choose Beijing’s preferences is likely to stimulate a backlash that will likely only lead to stronger South Korean public support for the U.S.-ROK alliance as a hedge against anxieties about the implications of China’s rise for the future of the Korean peninsula.

Duterte Terminates the Visiting Forces Agreement … or Does He?