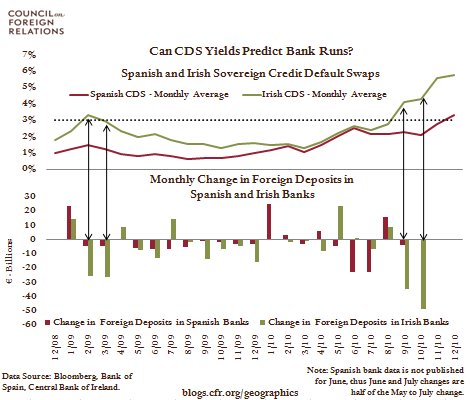 In the midst of the financial crisis of 2008, governments helped to prevent bank runs by guaranteeing bank debts. Yet as sovereign solvency itself becomes an issue, such guarantees quickly lose their value. If Ireland provides a rule of thumb, bank runs can be expected once sovereign credit default swap yields pass 3%. The figure above shows that when Irish government CDS yields first passed 3% in early 2009, foreign deposits fled the country. This happened again in late 2010. Now that Spanish CDS yields have broken the 3% threshold, there is reason to be concerned about the stability of Spanish bank deposits as well.

Geo-Graphics: Luck of the Irish Hinges on Banks

Luck of the Irish Hinges on Banks