Yves Smith -- responding to PIMCO’s Gross -- noted that governments, through the increase in their central bank reserves, have been intervening to support the US financial markets for a while now. She is, of course, right.

With the help of Paul Swartz of the Council’s Center for Geoeconomic Studies, I recently was able to get the full data set on the Fed’s custodial holdings. The data goes back to the early 1980s -- though the Fed’s custodial holdings of Agencies only appear in 2001, presumably when the shrinking stock of outstanding Treasury debt induced central banks to consider alternatives. The resulting charts need little commentary.

A chart showing the stock clearly indicates something changed in 2002. 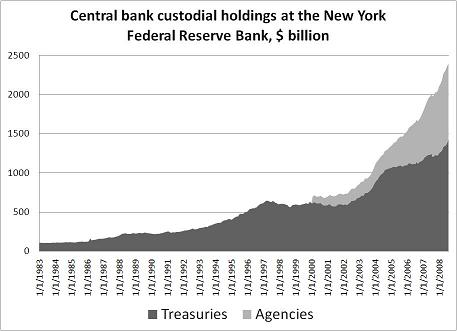 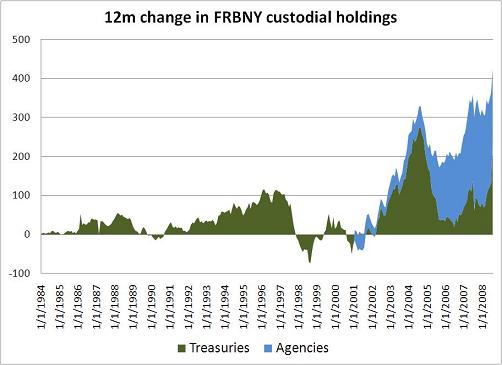 One, I suspect that over time the FRBNY’s custodial holdings captures a somewhat smaller share of total central bank dollar holdings. Consequently, the rise in central bank inflows recently is probably even stronger than what shows up in the FRBNY data.

Two, a chart comparing the Fed’s own assets to its custodial holdings is kind of interesting. It suggests that something fundamental changed in this decade. 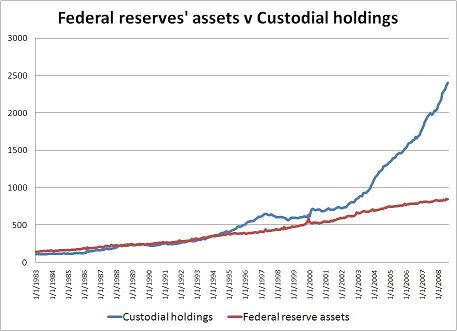 I personally think it supports a point I made earlier this month, and again yesterday: foreign central banks now are in a position where they can influence, through their asset allocation, the allocation of credit inside the US economy. Remember that the Fed is trying to mitigate financial market distress by changing the composition of its balance sheet -- and right now, the aggregated dollar balance sheet of the world’s other central banks is much larger than the Fed’s own dollar balance sheet.

I suspect that one of the reasons why PIMCO’s McCulley is worried about deleveraging is that central banks still disproportionately buy Treasuries. That has added to the mismatch between demand and supply in the market. Big existing balance sheets that until the crisis had a decent appetite for risk need to shrink. And some of the big balance sheets that are growing most rapidly right now don’t seem interested in credit market risk. Not right now.

One result: the Fed has sold lots of Treasuries into the market to lend to financial institutions holdings somewhat riskier assets. Another is that the Treasury itself is poised to sell Treasuries and buy Agencies, effectively adding another source of balance sheet support for risk assets.

Note: this post was slightly edited, as explained in the comments. I initially said deficit in one place where I meant surplus.