China indicated back in the 2004 that it wanted to rebalance its economy, and shift away from export and investment-led growth.

Despite a common perception in the US business community that China’s leadership can do pretty anything (economically speaking) that it wants to do, it is increasingly clear that the policies China has adopted to try to rebalance its economy have not worked.

The World Bank’s most recent quarterly update on China’s economy report notes that net exports will contribute as much to China’s growth in the first half of 2007 as in the last half of 2006:

Incredibly, the rise in the current account surplus (an excess of savings relative to investment) has come even in the face of strong investment growth.   Sure consumption growth is strong, but consumption is such a small share of GDP that even strong consumption growth contributes less to overall GDP growth than might be expected – especially when consumption is growing more slowly than investment and exports.    The World Bank notes that “almost all of the variation in domestic demand growth recently has been driven by investment, including the upturn in the first half.”

The World Bank notes that China’s surplus the “external imbalance remains the main macroeconomic issue” that China faces.    China’s steadfast defense of a very modest pace of appreciation against the depreciating dollar influences almost every other aspect of China’s economic policy.

But China’s huge external surplus isn’t just an issue for China.  China’s policy choices are shaping how the global economy adjusts to the US slump.    That slump – and the associated weakness in the dollar -- has already pulled down the US non-oil trade deficit a bit.   But the main impact of dollar (and RMB) weakness has been an increase in China’s trade surplus.

And while the US economy needs the boost from the external side right now, China’s economy doesn’t.  Basically, China’s continued de facto quasi dollar peg -- China broad exchange rate has actually depreciated recently, as the RMB’s rise v the dollar hasn’t offset the dollar’s broad fall – has redistributed some of the external boost from dollar weakness from the US to China. 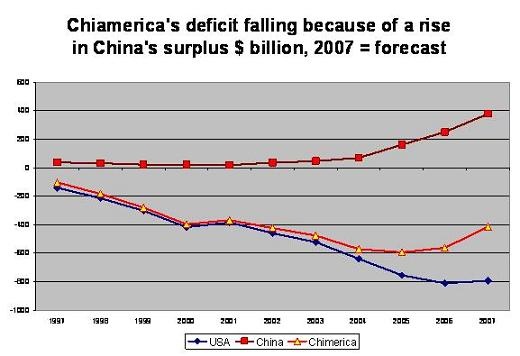 China will be lending the US significantly more than it makes selling to the US for the first time.

That, I suspect, is something that is likely to continue in the future.  It has a corollary as well: The gains to China from financing the US are falling, while the costs China has to bear to support the US are rising.

Remember, China has to buy an awful lot of dollars to keep from taking losses now.  It is has to do more than hold its existing position.  It has to add to its position.

And the more dollars China holds, the larger its ultimate losses.

No doubt, those betting that been that China would be willing to pay an ever-growing price to maintain stability in the US bond market have made the right call over the past few years.   But those making the bet are betting that China will continue to prioritize the interests of its export sector over its own long-term financial health, and perhaps domestic macroeconomic stability as well.   It is a reasonable bet.  But in my view, it isn’t quite a slam dunk.

A savings glut, not an investment drought -