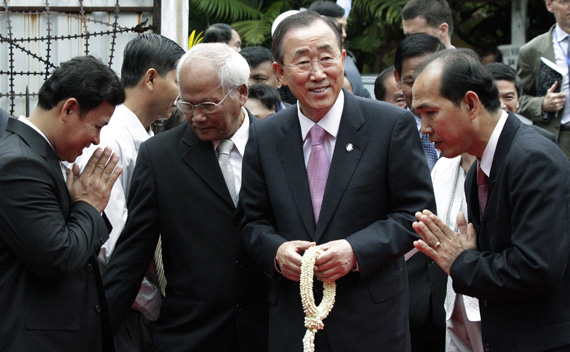 With all the tragic news coming out of Indonesia, including both a tsunami and the eruption of Mt Merapi, an important story out of Cambodia has gone mostly unnoticed. Cambodia’s Prime Minister, Hun Sen, has asked the United Nations to remove the head of the UN’s human rights office in Cambodia and also has asked the UN not to expand the international tribunal for the former Khmer Rouge to include any more than the five defendants who are in the process of being tried. “We must think of peace in Cambodia,” Hun Sen reportedly told UN Secretary-General Ban ki-Moon.

In fact, this stonewalling has been Hun Sen’s de facto policy for some time, but he now has become more explicit about it. And “peace” in Cambodia – by which he presumably means not reopening old wounds – is not exactly the prime minister’s goal. If a tribunal was to expand to include a much broader range of former Khmer Rouge, it might touch upon some of the prime minister’s own associates, since he has not been shy about surrounding himself with men and women with questionable histories. By digging much deeper into the Khmer Rouge era, and potentially meting out serious punishments to a much broader range of former officials, the tribunal would establish a firmer precedent that, in Cambodia, the powerful can be punished. For a prime minister who has become used to utilizing any tools at his disposal to intimidate, threaten, and jail the political opposition, that would not be a welcome development.

Unfortunately, without a broader examination of the Khmer Rouge era, Cambodia is unlikely to ever really come to grips with its past. Lacking any kind of broader program like de-Nazification, so many former Khmer Rouge officials still live in villages and towns side by side with their victims that it leads to outbursts of murderous violence against the old torturers, or summary vigilante justice. And without a tribunal that does more than blame all of the atrocities of one of the worst genocidal regimes in history on a few old men and women, young Cambodians, who already learn almost nothing about the Khmer Rouge era at school, will potentially just forget about that time – a situation that will allow future tyrants to again act with impunity.

But then again, perhaps that what’s Hun Sen wants.

UN Sanctions and their Impact on North Korea

A Review of “Under Beijing’s Shadow: Southeast Asia's China Challenge” by Murray Hiebert