The New York Times – in a big front page story on Monday– reported that the US trade deficit is about to head down.

The story presumably had been in the works for some time.    It is filled with quotes from distinguished economists indicating how the US slowdown combined with strong growth elsewhere in the world – especially in conjunction with the dollar’s fall – is set to bring the US trade deficit down.

Their basic argument makes a great deal of sense.  Most of the conditions for an adjustment are in place.   If I had been told a year ago that US growth would slow relative to global growth and the dollar would fall to around 1.35 v the euro, I too would have expected an improvement in the trade deficit.

There is just one small problem: the q1 data hasn’t really been consistent with the “adjustment that will bring the US deficit down is about to start” thesis.

US export growth has clearly slowed.    Y/y growth is now around 9%, well below its peak at 16% last fall.  Haver's data on the 3m and 6m growth rates in real exports show an even sharper slowdown.

And in March non-oil imports jumped up.  They are now growing at a y/y pace of around 6%.    If those export and non-oil growth rates are sustained – and if oil stays at its March price of $52 a barrel – the US trade deficit would fall, but only by a tiny amount.  If non-oil imports grow by 6% (y/y) and if oil is stable, any rate of export growth above 8.5% would bring the deficit down.    9% barely makes the cut.

Unfortunately, the US oil import bill is likely to rise a bit.

Barring a collapse in US demand – i.e. a recession – that pares back non-oil imports, I don’t see strong signs the US deficit is going to fall.   At least not in the near-term.  Over a longer horizon sustained dollar weakness should have an impact.

Still, the absence of stronger signs of improvement in the trade deficit is a bit of a puzzle.

Before suggesting some potential answers to the puzzle, though, let me present the data in a bit more detail, with the help of a series of charts --The following chart shows US exports (goods and services) and US non-oil imports (goods and services).     Non-oil imports have been very flat for the past few quarters.    The housing slump reduced US demand for timber and the like.   And the fall in US auto production also meant fewer imported parts and the like.   That isn’t hard to explain.   However, the jump in non-oil imports in March suggests that non-oil imports are starting to grow once again – as one would expect given ongoing consumption growth. 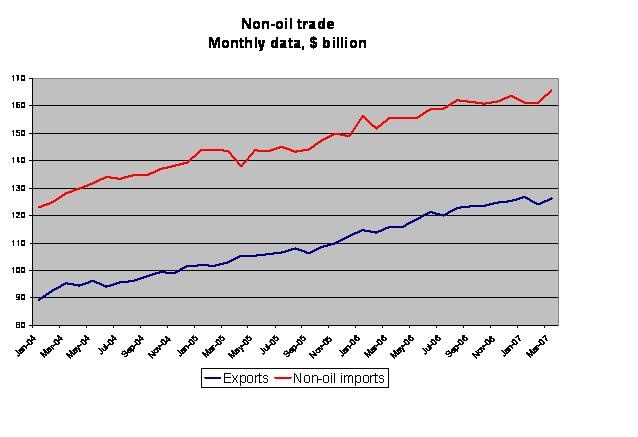 Starting in late 2006, the pace of export growth – the slope of the blue line – looks to have slowed.   That is why recent stories highlighting how strong US exports were helping to bring down the US trade deficit are about 6 months too late.   Y/y export growth peaked at 16% in September 2006 and has fallen steadily since as the next chart shows. 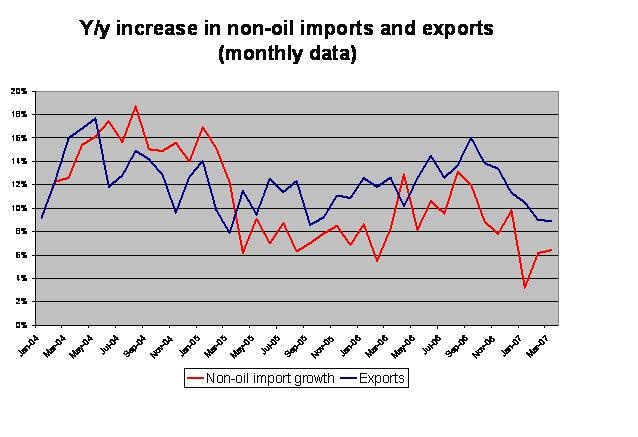 For a while it looked like strong export growth – combined with lower oil prices – would bring the deficit down.    The non-oil balance actually has been stable for some time, and it even looked to be heading down a bit late in 2006.

Alas, both the oil balance and the non-oil balance deteriorated in March.   The March non-oil deficit is about as big as it has ever been. 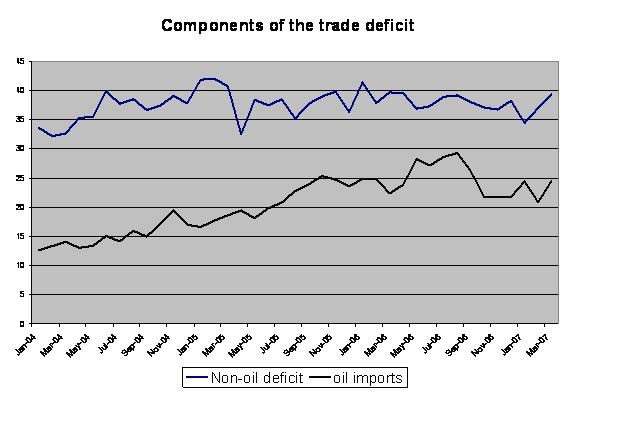 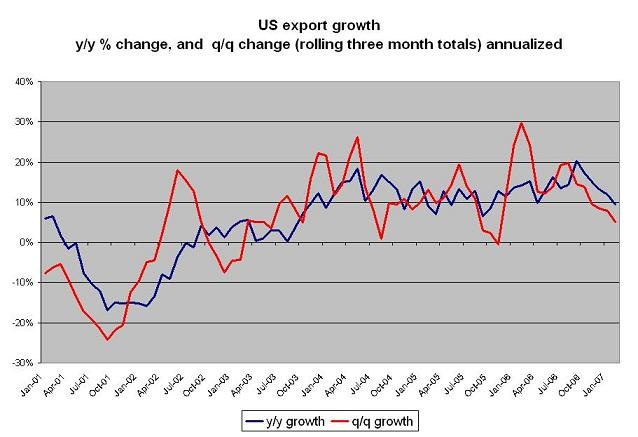 I shifted from goods and services exports to goods exports for a reason.  I wanted to compare the US data with the Chinese data.   Using a three month moving average also helps with the US/ China comparison: it helps smooth out some of the monthly variability in the Chinese data, which isn’t seasonally adjusted. 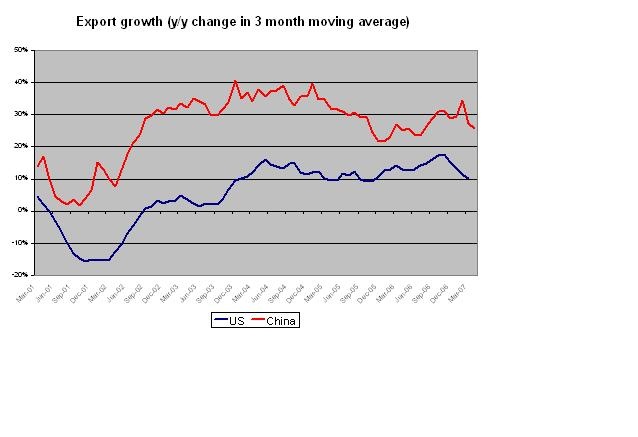 Chinese export growth has tended to accelerate (and decelerate) in tandem with US export growth.  Both countries after all are responding to similar forces – growth in the world and moves in the dollar.    Chinese exports though consistently grow faster than US exports.

I think the China v. US export graph highlights one reason why the dollar’s fall v. Europe – and strong global growth – haven’t done more to reduce the US trade deficit.

The falling dollar (read falling RMB) has done more to stimulate China’s exports than to stimulate US exports.  The RMB’s fall has also encouraged investment in Chinese export production.   Some of that investment perhaps substituted for investment in the US tradables sector.

Basically, the dollar’s move is generating adjustment – but it is generating more adjustment in China than in the US.  China’s trade surplus has surged over the past few years, paced by a very large increase in China's bilateral surplus with Europe (and more recently a shrinking deficit with the rest of Asia).   That allows China to provide more financing to the US.

A rising Chinese current account surplus and a constant US current account deficit implies a smaller deficit for “Chinamerica.”   The system works so long as China’s government is willing to provide subsidized financing to the US.

The other reason for the modest adjustment to date?

Look again at the graph showing the US oil import bill alongside the non-oil trade deficit.   The oil import bill is a bit off its highs from last summer, but it is still rather high.   At $25b a month, it is also large relative to the non-oil deficit.

In the past, a US slowdown has put downward pressure on commodity prices, helping bring down the US deficit.   But right now, strong growth globally is keeping commodity prices high.

Strong global growth helps US exports.   But it doesn’t help to bring down the US commodity import bill.

That is one reason why I increasingly suspect that strong global growth alone won’t be enough to bring down the US deficit.

Not so long as the exchange rate channel is blocked by central bank intervention.