He captures the poles of the debate well. Ken Rogoff argues that it doesn’t make sense for poor countries to provide the US with a form of foreign aid by holding more low-yielding US assets that they need: “central banks know that holding these low-yielding Treasury bills is just an aid program to the United States.” Some analysts – a group that clearly includes me as well as Jim Fallows -- question whether it makes sense for China to be financing, indirectly, real estate speculation in the US rather than schools in Shanghai.

“Investing money in the United States requires spending that much less on enormous problems at home, like pollution and a shortage of health care. By indirectly making mortgages cheap in the United States, China has helped foster the boom that saturated Miami with glittering condos even as tens of millions of Chinese live in dilapidated concrete block apartments.

Mike Dooley, on the other hand, argues that emerging market financing of the US is the best development program the world has yet devised. Emerging markets get a market for their exports; the US – uniquely – can run up big external debts without taking on a lot of currency risk because of the dollar’s global role.

There is a comparable debate over whether enormous central bank financing of the US is a “good” or a “bad” thing for the US. The growth of central bank dollar reserves has unquestionably provided the US with cheap credit. And many Americans are worried about the diminution of the dollar’s global status – in part because the shrinking international purchasing power of the dollar is a powerful symbol of America’s own shrinking global standing. It is hard to argue that it is “Morning again” in America when a dollar only buys 65 euro cents and, for that matter, when one dollar buys less than 1/100th of a barrel of oil.

The US would like to maintain the dollar’s global status – and not run up ever larger debts to the People’s Bank of China and the Saudi Monetary Agency. Right now, though, the dollar’s global status hinges in no small part on their willingness to hold dollars. Seriously. It really is hard to overstate how much the dollar’s current status as a reserve currency hinges on decisions made by the King of Saudi Arabia and China’s Communist party. That Saudis are on track to add $200 billion to their reserves, and most will be dollars. The Chinese are on track to add $600 billion to their reserves (and perhaps more), and a large share will be in dollars. Those two governments alone could finance the US current account deficit if – and it is a big if – all existing holders of US assets were willing to hold onto their claims.

There is an important subsidiary point to make here. Chinese financing of the US has been going up even as the United States’ importance to China’s own development has been fading. The Saudis and other oil-exporting economies are financing a growing market for their goods, but China isn’t. Its financing of the US right now just keeps the US market for Chinese goods from shrinking. China is – in effect – financing the US as a byproduct of a policy of holding the RMB down against the euro to support Chinese exports to Europe.

Goodman gave – in my view –a bit too much weight to the argument that the US has been a “remarkably solid place to put money, making it singularly able to attract savings.” That may be true over long periods of time. But it hasn’t been true over the past six years. The dollar is down something like 60% against the euro. US equities have underperformed global equities. And the high-tech wonders of American securitization technology – CDOs based on subprime debt – have recently made investors long for the comparative stability of Argentine bonds.

One of the reasons why the US now relies so heavily on central banks for financing right now is precisely that US financial assets haven’t been a good store of value. Goodman mentioned the slight fall in the dollar’s share of global reserves over the past few years, though he appropriately downplayed its importance. But he didn’t highlight what to me is the most important story of the past few years – the enormous rise in central banks dollar holdings. 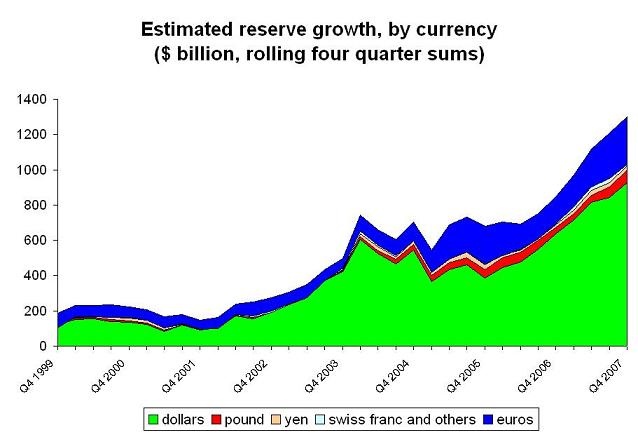 The key change since 2000 isn’t the end of the dollar’s status as a reserve currency. It is the growing reliance of the US on central banks to provide a large share of the financing needed to sustain large ongoing trade and current account deficits. Private demand for US financial assets – relative to US demand for foreign assets -- has fallen far faster than the US deficit. My estimates imply that central bank dollar reserve growth in 2007 exceeded the US current account deficit.

My estimates require making some Herculean assumptions about the currency composition of the reserves of China and the Gulf countries -- the key countries that (I suspect) don’t report data to the IMF. They account for a growing share of global reserve growth – and thus a growing share of my estimate for dollar reserve growth. I assume that they hold a higher share of their reserves in dollars than the countries that do report, and that they have not diversified aggressively away from the dollar. 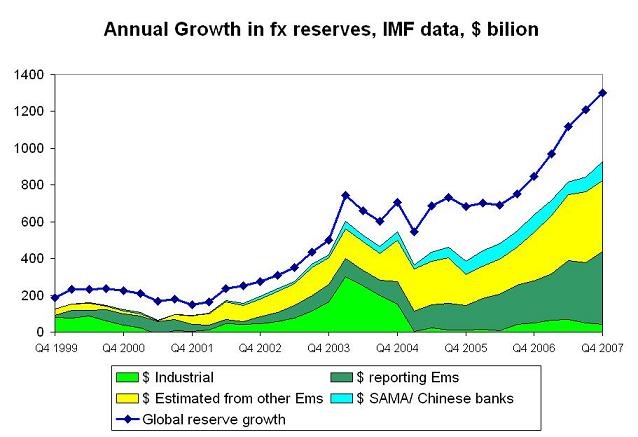 I could be off by up to $100 billion though and it wouldn’t really change the over all story. Central banks added way more dollars to their reserves than at any time in the past. 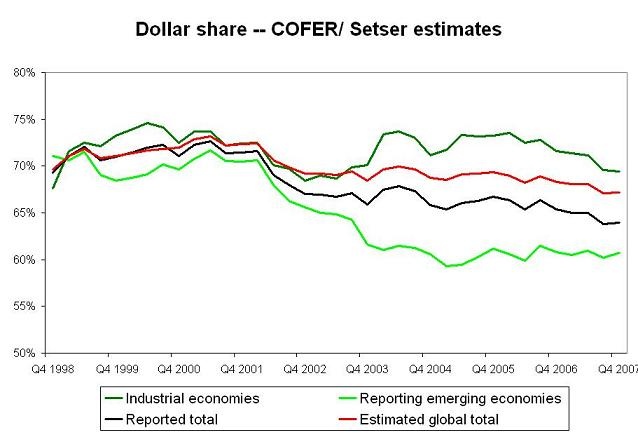 Note that a slight fall in the dollar’s share of global reserves is consistent with a strong rise in central banks holdings of dollars; overall global reserve growth has been exceptionally strong.

I don’t think my assumptions are unreasonable. Nonetheless, I am planning to try to upgrade my estimates over the next few weeks, largely by separating out the assumptions for China and the Gulf central banks. If anyone has a few tips about the right assumptions to use, I am all ears. And if a few central banks decided to release a bit more data to facilitate understanding of their impact on the global flow capital, I would be very happy – even if their data proved that my estimates are a bit off.

Be careful &#8212; real export growth looks to have slowed