As the Iranian oil embargo begins to bite, the widespread assumption is that this should hurt Iran’s oil revenues and government budgets, hopefully inflicting enough economic pain to bring them to the bargaining table. But rather counterintuitively, some basic economics suggest Iran may have cause to thank the United States, European Union, and embargo participants for helping raise their total oil revenue!

This can happen because while the embargo against Iran is reducing the overall amount of oil Iran can sell (at least for now), the drop in supply also raises the price for oil and therefore increase the revenue earned on each barrel of oil that Iran can still sell. Which factor wins out?

To answer this question, I did a very simple analysis. Let’s say that Iran exports 2.2million barrels of crude oil every day (mb/d), out of global consumption of say 87mb/d. Suppose the international community manages to embargo 100kb/d of exports, so that Iran now can only sell 2.1mb/d of oil. What would that do to Iran’s total oil revenue?

Well, the amount of oil that Iran can sell goes down from 2.2mb/d to 2.1mb/d but on the other hand, the price of oil goes up. How much? This depends on the short-term price elasticity of global oil demand. This elasticity determines the relationship, in particular the ratio, of changes in oil prices to oil demand quantities in equilibrium.

Good estimates of the price elasticity of global oil demand are hard to get because of data and other statistical issues. But my own estimates put it at 0.02 within one year. Folks at the IMF put it at 0.01 for the non-OECD and 0.04 for the OECD.

Assuming that oil prices would be at $100/bbl if there were no embargo, I calculated what would happen to Iran’s total oil revenue in the short-term over different embargo levels and different elasticities. This chart shows my results. 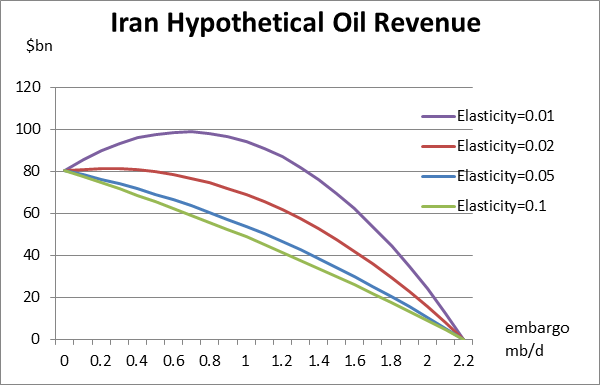 It turns out that for low enough elasticities and low enough embargo levels, an embargo can actually raise Iran’s total oil revenue! The price effect overpowers the lower quantity effect.

Now a rough guess as to the total amount of oil feasibly embargoed by the United States, European Union, and allies may be 500kb/d. Using my elasticity of 0.02, that puts the hypothetical oil revenue at $80bn annually, a hair lower than the $80.3 it would have been without embargo. So the embargo may be hurting but so little as to be almost useless.

Obviously in the real world, there are a lot of other factors that this simple analysis fails to capture. One, there may be more production from elsewhere to offset lost Iranian exports, notably from Saudi Arabia. On the other hand, this rhetoric and fear around an escalation and possible military confrontation in the world’s busiest oil chokepoint has put in more risk premia into oil markets as well.

And Tehran has every reason to play up that market fear. Coincidence that the (eventually unfounded) rumor of a fire in a Saudi pipeline that spooked oil markets recently originated from an Iranian media outlet?

Proponents of the embargo may have to recognize this dynamic which is undermining its effectiveness, and either increase the quantities embargoed or else try to mitigate the price channel. If not, Tehran may be justified in sending a big schadenfreude-laden Thank You card to Washington and Brussels!

Addressing the Risk of a Cuban Oil Spill