Credit -- according to one widely quoted Deutsche bank report -- is on sale. All of it. Corporate bonds can be bought now for a lot less than a few months ago (see McCulley and Toloui’s figure 4).

Treasuries didn’t have the best of weeks last week. But Treasuries and other safe assets with little credit risk (so long as the US government stands behind the Agencies if push comes to shove) are not on sale. Treasury yields -- at least for maturities out to ten years -- are consistently lower than (headline) inflation.

So are sovereign investors -- you know, the ones with long time horizons that enable them to buy the assets that leveraged private players have to cough up in times of stress -- snapping up "credit"? Or are they piling into safe assets?

We of course don’t really know, as the available data is full of holes and comes out with significant lags. But take a look at a graph (prepared in large part by the CFR’s Arpana Pandey) showing the 12m increase in central bank holdings of the safest dollar assets -- short-term deposits, short-term T-bills and short-term Agencies. 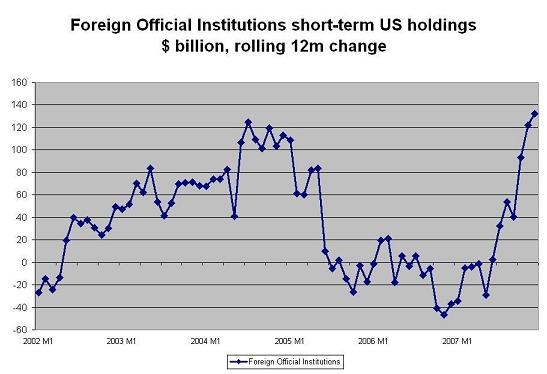 It sure seems like central banks started to increase their holdings of low-yielding safe short-term US assets just after the "subprime" crisis broke in August.

That may be smart. But it also isn’t exactly helping the credit market recover. Central banks -- who are still piling up reserves -- are a big potential source of "liquidity" to the credit market, not just a source of funding for the sovereign funds who supplied the banks with a bit of additional risk capital earlier this year.

If you look closely at the details of the US data, it turns out that the rise in a rise in holdings of short-term securities other than Treasury securities (think Agencies) accounts for most of the recent increase in central bank holdings. The line item that corresponds with short-term Agencies (along with negotiable CDs) accounts for $76b of the $102b total increase in central banks short-term holdings since the end of June.

The "effective nationalization" of US housing credit that BNP Paribas’ Richard Iley identified earlier this year and John Cassidy highlighted in Portfolio goes even deeper. It isn’t just that the Federal Home Loan Banks are supplying credit to a host of US financial institutions. Or even that the Agencies increased both their debt issuance and their purchases of mortgages late last year. Or that there are calls for a Federal Homeowner Preservation Corporation to take dud mortgages out of private hands. It is also that the Agencies are raising a lot of the money that they effectively lend to US households from central banks. It is de facto nationalization on a global scale, with foreign central banks serving as the ultimate creditors and the US government and various US government agencies and government-sponsored-enterprises serving as an intermediary between central banks looking for safe assets and the credit risk associated with the US mortgage market.

Perhaps central banks - not just state banks -- may have dabbled a bit in the credit market over the past two years. If so, they likely got burned, and perhaps some also lost trust in the private financial intermediaries selling repackaged credit. Right now they certainly don’t seem to want housing credit risk.

I am working off the thinnest of evidence. But a part of me still wonders if central banks have been far more willing to continue to diversify into equities than to diversify into credit risk -- and thus have provided more support to the equity market than to the credit market.

The SWF investment in big banks and broker dealers is just the most visible example.

That said, I can quite fairly be accused of seeing a central bank behind every corner -- or least every unusual development in the markets. And I could easily be overstating the impact of central banks on the market. After all, central bank demand for the Agencies own issuance hasn’t kept Agency MBS spreads from widening significantly. My sense though is that most central banks have shied away from agency MBS, with one -- admittedly larger exception: China.

Yet with central banks once again adding over $300b to their reserves in q4 (a $1.2 trillion annual pace) and the big oil funds probably adding another $50b in q4 alone, there is at least some reason to think that central banks and sovereign funds investment decisions are a factor shaping a host of market outcomes.

p.s. I would be interested to know if short-term Agency spreads have widened along with Agency MBS spreads.

Update: with a bit of help from the bond market experts over at Across the Curve, I have found out that the spread on 2 year Fannie Mae paper has widen recently, tho not as much as the spread on Agency MBS.  But the widening has occurred very recently, so there isn’t any TIC data to match it too.  And the very short-term Agencies I mentioned above are benchmarked against Libor.  They now trade inside LIBOR, but that probably says more about the banks than the Agencies.

What do the US, Saudi Arabia and China have in common?