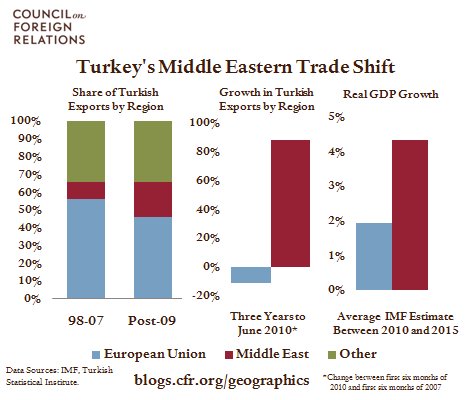 Turkey’s exports to the Middle East have grown substantially over the last three years, particularly to Iraq, Egypt, Libya, and Iran. In tandem, its share of exports directed to the European Union has declined. This shift is being driven primarily by the faster growth of Turkey’s Middle Eastern trading partners, but also by a conscious Turkish political decision to cultivate such ties. Prime Minister Erdogan recently said he expected a proposed preferential trade agreement with Iran to lead to a tripling of bilateral trade within five years. While the EU remains a major Turkish trade partner, its declining relative economic importance to Turkey can be expected to weaken its political influence over the country.

CFR: A Conversation with Abdullah Gül

Economist: Turkey and the Middle East

Stephens: The west Must Offer Turkey a Proper Seat at the Table