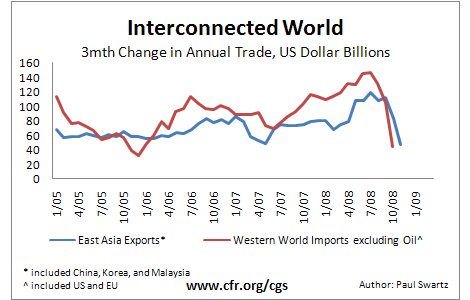 The World Bank is predicting a 2.1% fall in world trade for 2009, the first decline since 1982. As our chart shows, East Asian exports are slowing in tandem with Western world imports. Although G20 leaders pledged to maintain open trade at the November 15th summit, there is concern that politicians will exacerbate the problem by turning inward. Already Russia and India have raised tariffs and China is under pressure to take steps to support exports.

Baldwin, Evenett: What World Leaders Must Do To Halt the Spread of Protectionism (VoxEu.org)