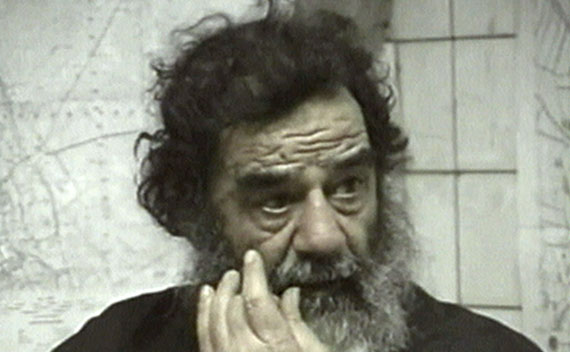 Seven years ago today soldiers in the 1st Brigade Combat Team of the 4th Infantry Division pulled Saddam Hussein from a hole underneath a two-room mud shack on a sheep farm in the town of ad-Dawr, Iraq.  Hussein had an AK-47, some chocolate, and $750,000 in cash when he was caught.  In the words of Maj. Gen. Ray Odierno, “he was caught like a rat.”

In other developments over the weekend.

1.  New START may get passed before the lame-duck session of Congress ends.  Sens. Olympia Snowe (R-Maine) and Susan Collins (R-Maine) have declared their support for New START, and Sen. John McCain (R-Ariz.) says Senate approval is “very close.” [The Senate first has to pass the legislation extending the Bush tax cuts and then pass the legislation funding the government for the rest of the year.  That means that the lame-duck session will have to be extended beyond this Friday, the 17th, to permit time for floor debate and a vote. President Obama says he is willing to delay his vacation to ensure a vote.

2.  John Cassidy uses his review in the New Yorker of several new books on China to provide a useful historical reminder that America’s embrace of open global markets came only after we became industrial titans who could out compete our rivals.  Before that we liked high tariffs and large-scale government intervention in the economy.  Our current zeal for entrepreneurial spirit tends to forget that entrepreneurs historically have succeeded in the United States not in spite of government but in good part because of government.  The big policy question for us today is what should the 21st century equivalent of the Central Pacific and Union Pacific railroads, the Tennessee Valley Authority, or ARPANET be?

3.  In yesterday’s Washington Post the development economist William Easterly criticized the work of celebrity activists.  Normally I would pass such an article right by, but since I posted on celebrity activists not once but twice last week, I gave it a read.  Easterly levies two main criticisms, neither of which seems particularly compelling.  The first is that Bono and other celebrity activists unlike his hero, John Lennon, seldom challenge political power.  It is not clear, however, why denouncing policymakers is preferable to lobbying them.  Lennon was a pop culture icon, but the impact of his activism was, to be nice about it, minimal.  Easterly’s second criticism is that Bono (and presumably other celebrity activists) doesn’t have the standing to participate in the policy debate.

But why should we pay attention to Bono’s or Jolie’s expertise on Africa, any more than we would ask them for guidance on the proper monetary policy for the Federal Reserve?

This “credentialism” leaves me cold.  My preference is to analyze the merits of what people propose rather than to worry about their backgrounds.  The irony here is that Easterly admits that the specific policies Bono advocates “are fine moves as far as they go.”

4.  My colleague Stephen Sestanovich just posted a piece taking issue with the triumphalism that has infected much of the coverage of what the WikiLeaks saga says about American diplomacy.  Steve has read and written his fair share of cables.  (I don’t know that any of them have leaked).  He was ambassador-at-large and special adviser to the secretary of state for policy toward the states of the former Soviet Union.