China’s latest surge in reserves – a surge that look its total holdings over two trillion dollars – didn’t really register in the financial media. China’s first trillion was a big story. The second trillion, not so much. It generated a few news stories and blog posts, but not the kind of big feature stories that accompanied China’s first trillion.*

The second trillion would have taken even less time if China hadn’t shifted about $200 billion into the PBoC’s other foreign asset and another $100 billion or so to the CIC (after netting out the funds that flowed back into the PBoC when the CIC bought SAFE’s stakes in the Chinese state banks). If all of China’s foreign assets are counted, China’s foreign portfolio likely topped $ 2 trillion back in June 2008.

But there is another milestone that China is fast approaching -- one that should be a big story. On current trends – and, to be sure, a lot could change, especially if China is serious about using its reserves to fuel the outward expansion of Chinese state firms, especially those state firms bidding for the world’s commodity supply – China’s holdings of Treasuries should top $ 1 trillion in about a year.

Chinese purchases of Treasuries, after taking account of China’s likely purchases through London, are once again growing in line with China’s reserve growth. Look at a chart of China’s total holdings of US assets.** Its Treasury holdings picked up in May. 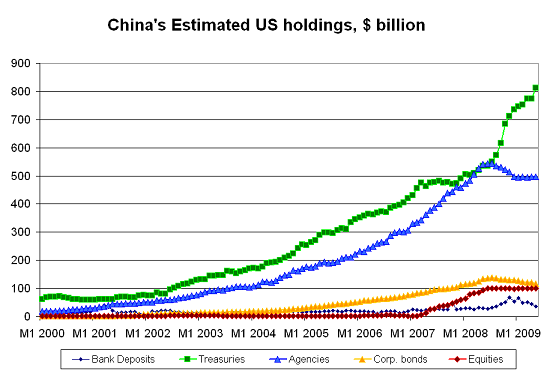 Or consider a chart plotting the 3m sum of the valuation-adjusted increase in China’s reserves against the rise in China’s holdings of classic US reserve assets (Treasuries, agencies and short-term bank claims). 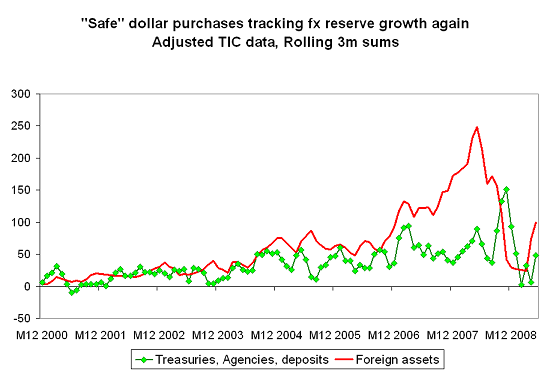 For a while in 2007 and 2008 the growth in China’s US holdings lagged its reserves. Chalk that up to diversification. The gap between China’s known US assets and its reserve growth came at a time when China was buying more “risky” US assets, like equities -- and likely increasing its exposure to a host of potentially "risky" emerging economies. Or chalk it up to increased use of private fund managers, including the money market funds used by the CIC. China’s dollar holdings likely increased a bit more rapidly than the US data implies.

Then for a brief period last fall China’s "safe" US holdings rose far faster than its reserves. That likely reflects a shift out of riskier assets – and a shift away from privately managed funds -- back towards classic reserve assets. I don’t know precisely what drove the surge in recorded inflows to the US. But something changed. After a period when inflows to the US lagged, they suddenly surged -- with almost all the inflow going toward short-term bills

And now China’s US holdings – particularly its Treasury holdings – seem to be rising in line with China’s reserves.

China is still buying other assets. Chinese state firms have been actively bidding for mineral rights – and companies that have mineral rights. And China has been stockpiling commodities. But over the last few months SAFE has essentially been buying Treasuries at – best I can tell – more or less the rate implied by China’s reserve growth.

This shows up pretty clearly on a chart plotting China’s purchases of "safe" US assets (all Treasuries, now that China has reduced its Agency purchases) and China’s estimated purchase of "risk" US assets (corporate bonds, equities) relative to the growth in the PBoC’s reserves and other foreign assets over the last 12 months. 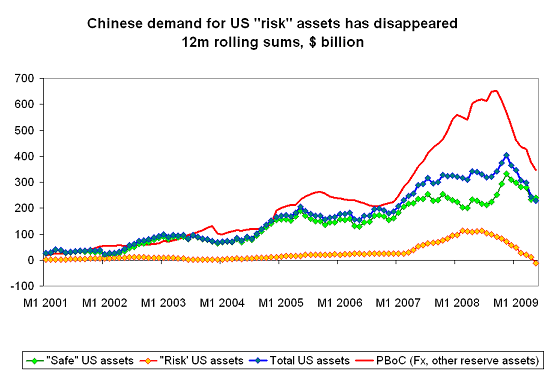 It is hard to get headlines though with a story indicating that China’s Treasury purchases have been more or less in line with its reserve growth. There actually was more evidence that China was diversifying away from the dollar -- in the sense of trying to reduce the dollar’s share of its rapidly growing reserves -- from mid-2007 to mi-2008 than there is now.

In some sense the biggest story right now is that China’s reserve growth resumed before China’s export growth. That’s a major change.

Exports – on a rolling 12m basis – are trending down. While the stock of China’s reserves and other foreign assets – which used to track the growth in China’s exports – are heading up. 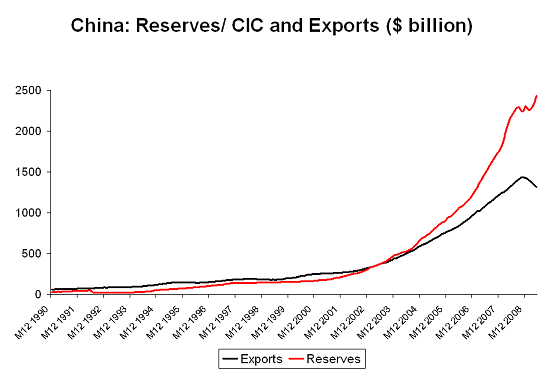 Add in the data on imports and it is clear that the reacceleration of China’s reserve growth in the second quarter was driven by renewed capital inflows, not by a rise in China’s trade surplus. That shouldn’t be a surprise. Private investors generally prefer growing economies to shrinking economies – especially growing economies with surging equity markets. China’s stimulus has worked. But its success has meant that money now wants to move into China, not out of China.

Chinese policy makers haven’t found a way to have it all. They want a growing, thriving China that doesn’t attract private inflows. Inflows are hard to sterilize, and China -- with a still large current account surplus -- doesn’t need the money. Good luck. Especially if policy makers want a growing, thriving China that remains pegged to a (once again depreciating) dollar …

See Eswar Prasad and Isaac Sorkin, among others.

* Jim Fallows’ big feature story didn’t appear until 2008, so it didn’t really accompany China’s first trillion. But it was probably the most widely read of all stories on China’s reserves.

** As usual, the survey revisions have been smoothed out using the Setser/ Pandey methodology; I also estimate that around 50% of the UK’s recent purchases of Treasuries will be reattributed to China in the 2009 survey. . My estimate for China’s corporate bond portfolio is based on cumulative flows over the last four years rather than the survey data, as China seems to use a non-US custodian for its corporate bonds.