In December and January, the Financial Times (Messerlin/ Sally) and the Wall Street Journal (Charles Wolf’s December oped was reinforced in January by Bill Willby) and Foreign Affairs all published opinion pieces arguing that China’s growing trade surplus isn’t the product of the an undervalued RMB. I do not remember any comparable set of articles arguing that an undervalued RMB actually does influence trade flows.

The core argument of all these articles was that US or European pressure on China to allow the exchange rate to adjust was misguided as the RMB’s value has little impact on China’s trade surplus. However, there is growing evidence -- in my view - from both the US and Europe the RMB’s value does have an impact.

The rise in Europe’s deficit with China since the RMB started to depreciate against the euro back in 2002 provides some of the most convincing evidence that exchange rates do matter. In 2002, EU-Chinese trade was in rough balance. In 2007, the EU is on track to register a deficit with China of close to euro 160b, or more that $230b. The 10 month deficit was over euro 130b. That is a big reason why China’s current account surplus is forecast to rise to $360b in 2007 by the World Bank.

But I want to set Europe aside and instead look at how various countries and regoins’ bilateral current account balances with the US have evolved over the past several years.

The housing boom initially pushed up the US deficit, and then the more recent slowdown has brought down the non-oil deficit. The overall pattern of US growth clearly shaped the overall evolution of the current account deficit. Exchange rates are not the only factor that matters.

But over this period there also have been large exchange rates moves. The dollar has depreciated significantly against the Canadian dollar, the euro, the pound and most European currencies. It has depreciated modestly against some emerging Asian currencies (notably the won and baht). And it moved by much less against the RMB and yen. The RMB’s roughly 13% appreciation against the dollar from 2002 through the end of 2007 (and a bit more since then -- the total appreciation is now 15%) remains small compared to the moves in the euro and won - especially given the rapid growth in Chinese productivity.

What happened? Consider the following graph. The stacked colored area shows the total US deficit with (non-oil exporting) Asia.  The lines show the US deficit with Canad and Europe. All data comes from the BEA’s interactive tables, and has been presented as a rolling four quarter sum. 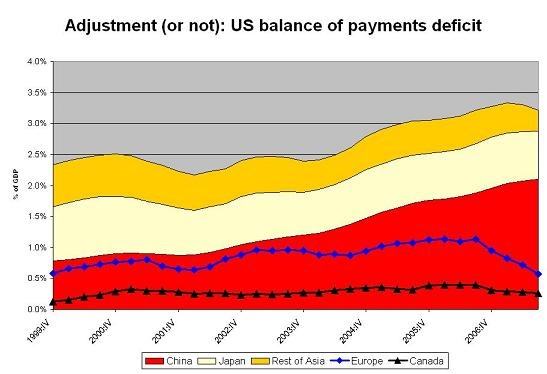 The US current account deficit it isn’t coming down symmetrically. The US deficit with Europe and Canada is falling. The overall deficit with Asia has stabilized as the US economy slowed. The deficit with both China and Japan continues to grow. The divergent lines for Europe and China provide -- I suspect -- evidence that exchange rates matter. It is hard to explain the difference paths on the basis of differences in growth rates.

More detail on the evolution of the US bilateral current account deficit with various regions follows.

The current account balance is a bit different than the trade balance - the balance on income (payments on US assets held abroad less income for US holdings of foreign assets) and transfers also figure in. The income balance is particularly relevant for China and Japan given their large holdings of US assets - and for Europe, as the US has substantial investments in Europe and Europe has substantial investments in the US.

The graph for China shows that all components of the current account are contributing to the deficit. 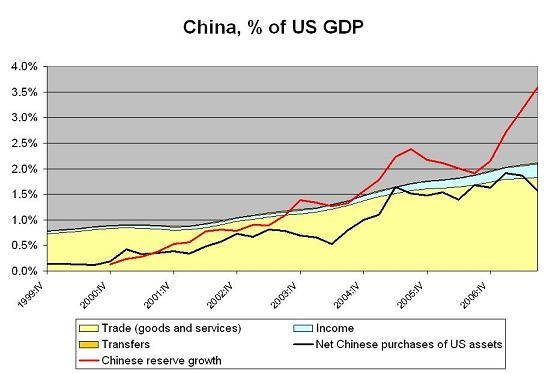 It also shows that recorded capital flows from China are falling relative to China’s surplus - a development that likely reflects Chinese purchases through London and Hong Kong more than a major shift away from US assets. Note the gap between Chinese reserve growth and recorded inflows to the US that starts to develop after q2 2006. It isn’t a coincidence that the q2 data is the last survey. Chinese purchases will be revised up when the US data is revised this spring.

The same data is available for Europe and Japan for a longer period of time - and it strongly suggests that moves in the exchange rate do have an impact on the current account balance (with a lag).

The US trade deficit with Japan came down in the late 1980s after the adjustment in the yen dollar. the dollar’s weakness (v. the yen) in 1995 also seems to have had an impact. 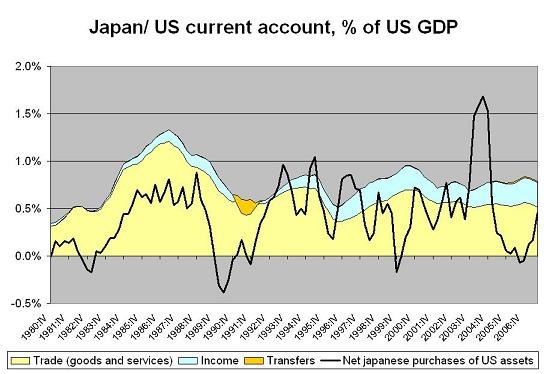 The Japanese data does pose one puzzle: it appears that capital flows from Japan to the US disappeared in 2005 and 2006. That is a bit puzzling, given all the talk of the carry trade. My guess is that the US data fails to pick up some flows that originate in Japan, which get channeled through either London or the Caribbean for (again) a combination of tax and regulatory reasons. Just a guess though.

One other point that is worth highlighting - net Chinese purchases of US assets now are probably around 3% of US GDP, and that is all a state flow. That is meaningfully different than the flow from Japan in the late 80s. Japanese flows then never exceeded 1% of US GDP, and that was mostly a private flow.

The data showing the evolution of the US current account deficit with Europe paints an even cleaner picture. The bilateral deficit is coming down fast - just as it did in the late 1980s. And it is falling for the same reasons - -namely, a slowdown in US growth v European growth AND a big fall in the dollar. 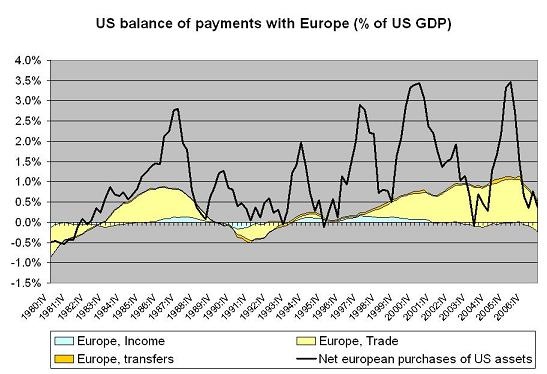 There is - obviously - a surge in European demand for US assets in late 2005. But that is an artificial peak - the Homeland Investment Act led American firms that had built up profits in low-tax European jurisdictions to bring their funds home. Trust me on this - the data shows a $300b swing in dividend payments on FDI during this period. That was the first clue - at least for me - that tax arbitrage plays a very large role in the US balance of payments data with Europe.

But even with tax arbitrage (booking as many profits in Ireland and Switzerland and the Netherlands as possible to take advantage of their low tax rates, setting up SIVS offshore so their profits are taxed at a lower rate and so on) shaping the US/ European data (the impact of this tax arbitrage is simple: it tends to increase gross capital flows and it tends to increase both the US trade deficit and the US investment income surplus with Europe), the US European bilateral balance still sure seems to reflect exchange rate moves.

This is easier to see if the capital flows line is dropped from the previous graph. I also superimposed data on the Asian balance and net petroleum imports on the same graph - 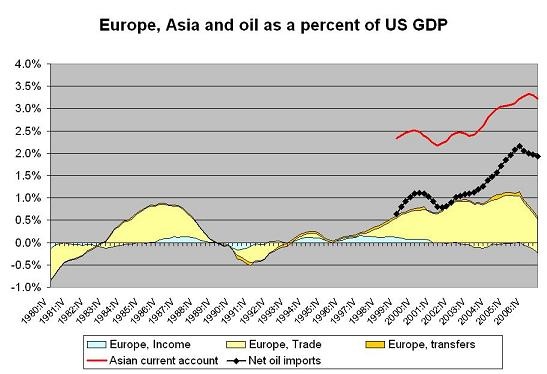 If the dollar remains weak against the euro and other European currencies, there is good reason to think the US bilateral balance with Europe will swing into surplus. An important adjustment is clearly underway.

The recent stabilization in the balance with Asia - by contrast - seems cyclical. It reflects a slowdown in the US relative to Asia. The broader adjustment required over time to bring the US-Asian economic relationship into better balance - and by that I mean that the US should export more, save more and rely less on Asian central banks and sovereign funds for financing - hasn’t really begun.

The recent improvement in the oil balance reflects the stabilization of oil prices (on a rolling four quarter basis) through the end of q3. The average price over the last four quarters was around $60 barrel (the average import price was lower). If oil stays close to 90, the oil balance will deteriorate by over 1% of US GDP over the next few quarters. Ouch

The hard slog of real adjustment hasn’t begun - not v. Asia, and not v. the oil world.

And here, the adjustment likely requires a lot more than faster growth in the rest of the world. Asia is growing quite fast. China especially. It hasn’t reduced the US deficit with Asia. Not when net exports are still driving Asian growth (Asia substituted European for American demand over most of the last year, though q4 looks a bit different). And fast growth globally - barring a major technological shift - means higher oil and energy prices globally. That works against the US even as strong growth helps exports: the US now imports a ton of energy.