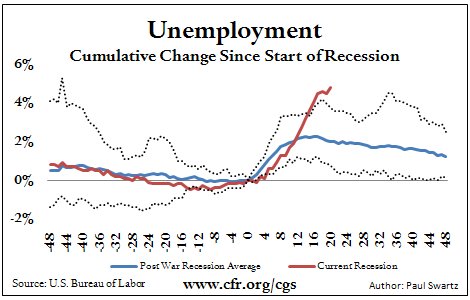 In a typical post-war recession, recovery would be well under way after twenty-one months. This time around, all that has emerged is limited optimism over ‘green shoots.’ Although conditions in financial markets have improved (e.g., the spread between AAA corporate debt and treasuries has narrowed by over 150 basis points since November 2008), the labor market has continued to deteriorate. The chart below indicates that the increase in unemployment since this recession began is worse than all post World War II recessionary spikes in unemployment.

Altman: Why This Will Not Be a Normal Cyclical Recovery