Skip to main content
Is the United States Making Progress in STEM Education?

Last week President Obama held a science fair at the White House. More than 100 students showed up. So too did Bill Nye the science guy. The student-crafted projects ranged from a new cancer therapy to a marshmallow cannon.

So why is the leader of the free world hosting a science fair, his second so far in office? To help celebrate young people who excel in science, technology, engineering, and math (STEM) subjects and to encourage more kids to follow their lead. As the president said at the fair, educating today’s students in STEM subjects will help “America compete for the jobs and industries of the future.” Indeed, a just released report by the president’s Council of Advisers in Science and Technology concluded that American businesses will require one million additional graduates with STEM degrees over the next ten years to stay competitive internationally.

Obama and his advisers are not alone in calling for more STEM education. Bill Nye says the United States must invest in STEM to “remain the world leader in technological innovation.” Silicon Valley Congressman Michael Honda (D-CA) is working to create an Office of STEM Education in the Education Department. Florida Governor Rick Scott has promised to make STEM education a priority at all levels in Florida institutions.

What worries this diverse array of opinion leaders is captured in the story told about Steve Jobs’s reply when President Obama asked why Apple had located a plant in China rather than in the United States. After noting that Apple needed 30,000 engineers to run the factory, Jobs said, “You can’t find that many in America to hire.”

So how is America doing at turning out STEM majors? Any signs of significant improvement? As the two charts below suggest, no. 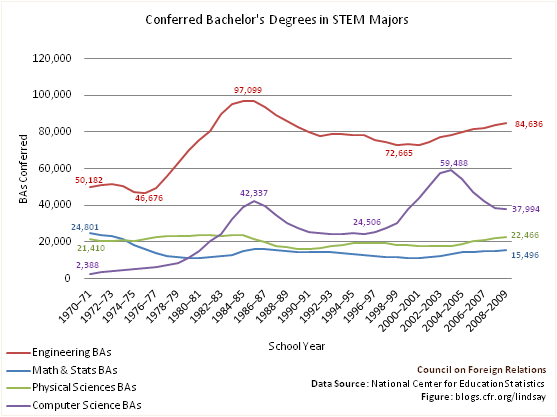 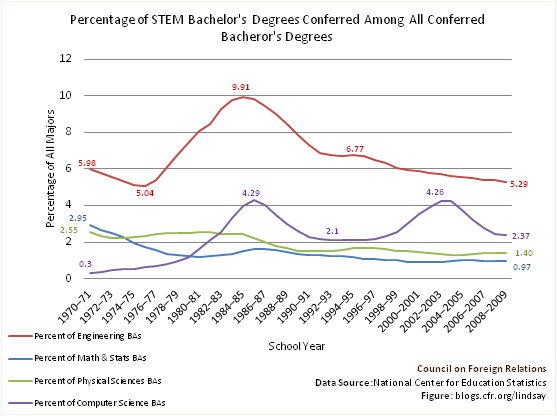 The total number of engineers has risen in recent years, but it remains below the peak number reached in the early 1980s (Chart 1). But when you take into account the fact the number of college students has grown sharply over the past three decades—in large part because of demographic trends—the relative number of undergraduates majoring in engineering has declined (Chart 2). Meanwhile, computer science majors have followed a boom-and-bust cycle over the past three decades, no doubt reflecting the boom-and-bust cycle in the high-tech industry.

So if political leaders from both political parties are banging the drum on the importance of producing more graduates in STEM majors, why aren’t we seeing more? It’s not that entering college students aren’t trying STEM majors. They are. It’s that once they get a taste of college-level STEM work, many of them opt for different majors.

Why the high attrition rates in STEM fields? Lots of reasons are offered: STEM courses are hard; teacher quality is often sub par; grade inflation in the humanities and social sciences attracts students looking to maximize their GPA; and mathematically inclined students see bigger paychecks to be had by majoring in fields like finance and consulting.

In all, we have three decades of experience that suggests that hosting science fairs and praising the virtues of STEM subjects isn’t likely to produce more STEM majors. Changing the trends in these two charts will require investing significantly more in grants and financial aid for students who chose to major in STEM subjects. That will cost a lot of money, something that cash-strapped local, state, and federal governments don’t have in abundance. But it is the kind of investment the United States will need to make if it wants to stay competitive.