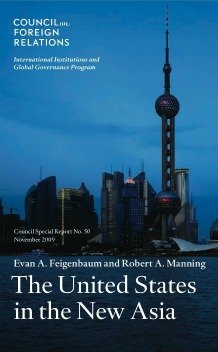 For the next several days, President Obama is hosting leaders from around the Asia-Pacific region in Hawaii for the annual summit of the Asia-Pacific Economic Cooperation (APEC) forum. So this seemed like a good time to repost a Council on Foreign Relations special report on Asian regionalism that I co-wrote with my colleague, Bob Manning, in the run up to the 2009 meeting.

Our report, The United States in the New Asia, is two years old. But in my view, it’s still deeply relevant.

Some good things have happened since we wrote our paper in 2009. For one, the United States has joined the Trans-Pacific Partnership (TPP) negotiations, and that is a decidedly good thing. There isn’t likely to be a successful Doha Round nor is another global trade round likely anytime soon. So TPP can fill in some of the gaps between global trade liberalization and bilateral and regional agreements. The United States has also—finally—completed the Korea-U.S. Free Trade Agreement (KORUS).

And yet the larger questions Bob and I raised about the United States and Asian regionalism remain important and mostly unanswered.

Yes, the United States is more engaged on issues of regionalism in this part of the world than when Bob and I fretted and complained two years ago. We worried that the United States risked marginalizing itself by failing to appreciate that pan-Asian institutions were gelling without American participation. And this was especially true, we argued, on issues related to economics and finance:

Some multilateral institutions that exclude the United States have become the locus of economic and financial trends that will increasingly disadvantage U.S. firms and work against U.S. objectives.  Certain preferential trade agreements and financial arrangements, as well as regionally-based regulations and standards, threaten American interests. And some of the new institutions created without U.S. involvement, notably ASEAN Plus Three, hold the potential to marginalize the United States in Asia over time.

But more, Bob and I worried that institution building in this part of the world had become stale, devoid of strategy, and increasingly meaningless. We encouraged the United States to show greater leadership on behalf of what we called "a more purposeful multilateralism."

And that’s where the two largest questions we raised remain especially relevant:

First, is there a purpose to all of this region’s redundant and overlapping geometry?

Second, what can the United States do in concrete terms to promote a more purposeful multilateralism? Put differently: How can Washington begin to ensure that function drives form rather than the other way around?

Bob and I argued that groups will need to emerge that can solve real problems by pooling real capabilities. But unfortunately, we argued, most of the region’s institutions have only demonstrated that “process has become an end in itself …

... Innovation has been sadly lacking in both pan-Asian and Asia-Pacific forums. Instead, the region has seen a good deal of hollow process, driven by bureaucratic inertia or path dependence: groups are formed, ritualistically meet, ritualistically issue statements, and then ritualistically persist.

These underlying questions about the relationship between form and function remain relevant in both pan-Asian and trans-Pacific regionalism.

Sure, the United States has solved its Woody Allen problem—as Woody put it, "90 percent of life is just showing up." But have pan-Asian or trans-Pacific architectures become any more functional? Not enough. And so the United States should be working with partners across the region to help answer these and other questions. A good place to start would be with like-minded partners not least in Canberra, Tokyo, Seoul, Singapore, Jakarta, Hanoi, and Wellington.

As to this year’s summit, well it could be a more interesting meeting than usual because the United States and China appear to have different ambitions and expectations, not just for the future of APEC but for the agendas around which regional groups are organized. A back-and-forth is playing out in the APEC context on issues like tariffs on environmental goods and services. And that dynamic will likely emerge in other forums too—for instance, at the upcoming East Asia Summit, where the United States and Japan, among others, aim to discuss issues related to maritime security.

With APEC now upon us, I hope you’ll take a second look at what Bob and I wrote in The United States in the New Asia.