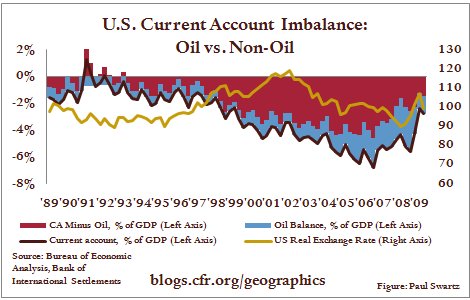 The U.S. non-oil current account balance started to improve in 2006 after a period of real dollar depreciation beginning in 2002. However, the overall deficit remained high, reflecting the run-up in oil prices. The deficit improved substantially after oil prices collapsed during the financial crisis. As the crisis recedes oil prices have started to rise and the dollar has resumed its fall suggesting the potential for a continued improvement in the non-oil deficit, but deterioration in the oil balance. The net effect is likely to be a worsening of the current account deficit.

Willis: Trade Deficit in U.S. Increases by Most Since 1999

How "Global" Are Global Imbalances?