The large deficit projected for fiscal 2009 stunned many. It is natural to wonder how such a huge deficit could be financed. But remember one thing: the US placed $1685 billion of Treasuries in the market in 2008 without pushing interest rates up.

The Fed’s holdings of Treasuries – counting the securities it has lent out to the market – fell by $427 billion.

That implies an absolutely huge increase in the stock of Treasury debt in the market. The outstanding stock of marketable Treasuries not held by the Fed rose from about $3795 billion to about $5480 billion.

All that debt had to be bought by the PBoC and other foreign central banks right?

Well, yes and no. 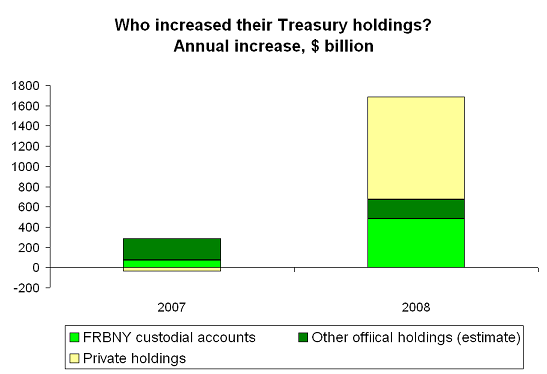 The Fed’s custodial holdings of Treasuries rose by $481 billion. That leaves $1.2 trillion of the $1.7 trillion increase in the stock of marketable Treasuries in the market in private hands. Foreign central banks don’t hold all their Treasuries at the Fed. Past data revisions – and a bit of extrapolation on my part – suggest that centrals bought $192 billion that doesn’t show up in the Fed’s custodial accounts. That implies a nearly $700 billion increase in central banks’ holdings of Treasuries.

That’s a record. And it is plausible in a world marked by record reserve growth (at least until the fourth quarter) and a flight to safety by central banks. It is way more than central banks bought in 2007. In 2007, the custodial holdings rose by $70 billion, with most of the rise in the official sector’s treasuries ($289 billion per my model which smooths the survey revisions over the course of the year AND tries to anticipate the impact of the June 2008 survey; $192.4 bilion in the Treasury data) came from central banks that weren’t using the Fed as custodian. Indeed, the 2007 increase in foreign central bank holdings ($289 billion) exceeded the increase in the stock of marketable Treasuries in the market ($247 billion).

But even if central banks bought about $700 billion of US treasuries in 2008, private investors also increased their holdings of Treasuries by over $1 trillion. In a year. That too is a record.

Some of those Treasuries were used to fund the Fed’s crisis lending, some funded the TARP and some funded the fiscal deficit. But in some sense it doesn’t matter. The market absorbed that huge increase in stock – and Treasuries even rallied in the process.

Facts are facts. The US has already proved it can raise over $1.5 trillion in a single year … without pushing yields up.

Of course, ability to the market to absorb this huge surge in outstanding Treasuries was a function of a crisis-induced panic and a scramble for liquidity and safety. And past performance is no guarantee of future results.

The financial crisis should subside this year. The US government isn’t going to let a big bank fail. But the financial crisis has turned into a severe economic crisis. Consumption is falling in the US and globally; investment is tumbling. That frees up funds for the Treasury market.

My guess is that central bank demand for US Treasuries will fall both absolutely and as a share of the US borrowing need. That is no bad thing. It is a byproduct of a smaller US current account deficit and a smaller current account surplus in much of the emerging world. Adjustment means things change, not that they stay as they were.

The United States past reliance on central banks for financing – and China’s central bank in particular – was a function of four things:

B) A lack of household savings in the US

C) A lack of private demand for US treasuries

All four look set to change.

Household savings in the US should rise. The “wealth” effect has gone into reverse; falling home values and the slide in the stock market imply that folks have to save more to rebuild their wealth. Read Merrill’s David Rosenberg. Or the forecasts of Goldman’s (crack) US economics team.* Private investment will fall.

Private demand for Treasuries has already increased. The Treasury at least gives your principle back on time. With others you cannot be sure.

To be clear, official demand for Treasuries surged in the fourth quarter even as reserve growth slowed – as central banks shunned Agencies and likely pulled big sums out of the hands of private fund managers and parked those funds at the Fed. But once that reallocation is finished, growth will be driven by the underlying growth in countries reserves. And that is slowing …

The widespread conception that a bigger deficit implies the need for more financing from China is almost certainly off.

China’s reserve growth is likely to slow, and over time so will its Treasury purchases – even if they haven’t yet. China isn’t going to add close to $70b to its short-term Treasury holdings forever; the pace of China’s purchases will slow.

That isn’t a major problem though, not so long as it happens gradually.** Not in a context when private demand for Treasuries has increased dramatically.

*I am biased; a couple of friends work there.

** To be clear, there is enormous difference between a gradual fall in China’s purchases of Treasuries – one where China goes from buying $50b or more of Treasuries a month (its likely total in the fourth quarter; this is what I think Bradsher missed) to buying a more modest number – and a sudden stop to all Treasury purchases. China probably will buy between $300-400 billion of Treasuries in 2008. If that total falls to say $200-300 billion, the US market can adapt. If it goes to zero that would be a bigger problem (see what happened to the agency market). And net sales would be an even bigger problem.

Even here though there is one qualification. If say a surge in hot money outflows brings down China’s reserves but raises say Hong Kong and Taiwan’s reserves, as both intervene to keep hot money inflows from pushing their currencies up the overall effect is the same: Hong Kong and Taiwan end up financing the US instead of China.