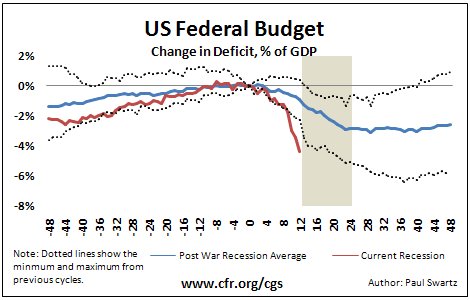 As our chart indicates, the U.S. budget deficit is expanding at its fastest rate in the post-war era. Obama’s proposed fiscal stimulus will add to this deficit. This aggressive fiscal response is meant to offset a sharp contraction in GDP. As our updated CGS indicators package shows (see right hand column), the 3.8% fall in the fourth quarter is unlikely to mark the end of the downturn.

Economist: The Economy-Even Worse Than It Looks