If exports fall faster than imports, the deficit will stay large.

In September, the headline deficit fell because the petrol deficit fell. The petrol deficit has gone from $43 billion In July to $35.6b in August and $32.1b in September as the average price of imported oil fell from $125 a barrel to $108 a barrel. That alone generated a $10 billion improvement in the trade balance -- and there is more good news to come. Especially if the US continues to import 5% less oil even after the prices come down.

But the non-petrol goods deficit is now moving in the wrong direction. It increased from $29.3b in June to $35.6b in August. Non-petrol exports fell by $9.9b over the last two months, while non-petrol imports fell by "only" $3.7 billion. The sharp fall in exports shows up clearly in a chart showing "real" non-petrol goods exports and imports. Real data tries to show what is happening if changes in price are taken out of the equation -- it is meant to measure the actual quantity of stuff that is traded. 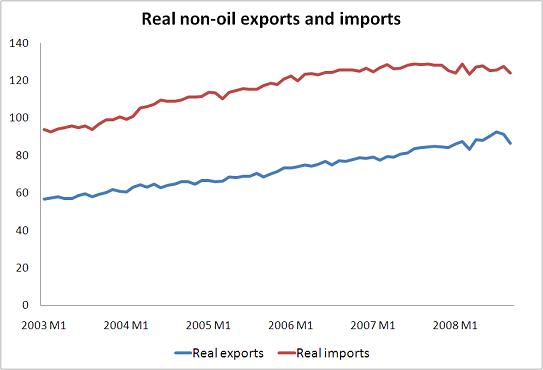 The fall in real goods exports has been steep enough to push the real non-petrol trade deficit back up. 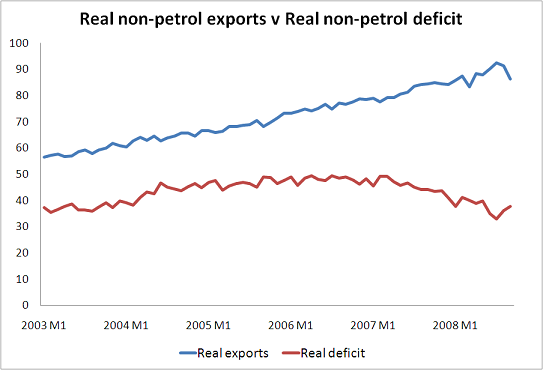 And remember this is the September data. Since then the global outlook has deteriorated -- and the dollar has strengthened substantially. That isn’t going to help US exports. The main reason why the US should support more emergency lending to the worlds’ emerging economies is pure self-interest: if their currencies continue to fall, the US isn’t going to be able to rely on exports to help it get out its own domestic troubles.

There is one small bit of hope. The monthly data jumps around a lot. Two months do not a trend make -- though in this case, the falloff in exports is almost certainly directionally right. But the pace of the fall could reflect some month-to-month noise. Civil aircraft exports fell from $5.5b in August to $2.2b in September (Boeing strike?). So long as the Gulf and India and China don’t cancel their Boeing orders, civil aircraft exports shouldn’t fall by quite that much. Average monthly aircraft exports this year have been around $4b.

Two other things to watch:

Two, what will happen to the US deficit with China. Y/y exports are up $17% while imports are only up 7%. But given the gap between what the US imports from China and what it exports to China, that works out to $16b in new imports and a little over $8b in new exports, so the bilateral deficit is still growing. However, if both import and export growth turn down, the fact that the US doesn’t sell much to China (absolutely) would start to work in the United States favor.

At least directly. Watch out for the rebound. Falling Chinese demand for Brazilian iron ore and soybeans could mean less Brazilian demand for US manufactured goods ...

Thanks to Arpana Pandey for help on the graphs.