One of the big stories in China right now is the serious water scarcity plaguing much of the country. While China often confronts serious seasonal droughts—last year northern China experienced the worst winter drought in 50 years, costing the region 50 percent of its agricultural output—this year’s drought has hit even the typically water-rich southern provinces. According to one report, 600 rivers in southern China have simply dried up. 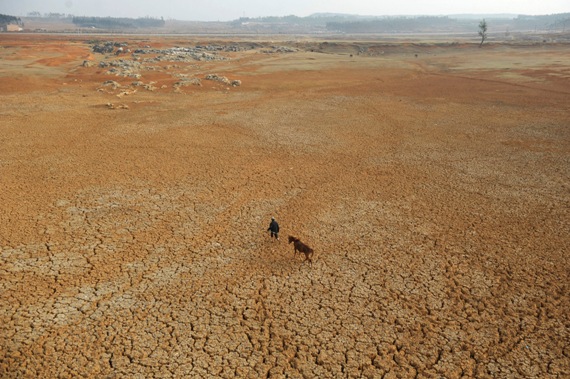 A farmer and his horse walk on a dry reservoir bed in the drought-hit Luliang County of Qujing, Yunnan province March 22, 2010. (Courtesy of Reuters/Stringer)

The lush, biodiversity-rich province of Yunnan has run into particular trouble. The international airport in the capital city of Kunming has sunk and cracked as underground water reserves have failed to be replenished. More than 24 million people in the province and surrounding areas have been without easy access to drinking water, and the mainland media are claiming that the lack of water is producing an endless stream of environmental refugees. The Hong Kong-based South China Morning Post has even asserted that children and elderly people are being abandoned in villages as others leave in search of water. While Beijing is denying such dramatic media claims, it has also said that the government, itself, would begin to move people if the situation did not improve soon.

China’s troubles, of course, are not only their own to bear. While Beijing is busy facing down the concerns of its own people, it must also manage the unhappiness of its downstream neightbors. The Mekong River—which flows through Yunnan and feeds the Southeast Asian nations of Myanmar, Thailand, Laos, Cambodia and Vietnam—has reached its lowest levels in three decades. Fishermen and environmental NGOs in several of these countries have long blamed upstream Chinese dams for their declining fish catch, and this year’s drought has given added weight to their calls for China to share information and consult on development plans for the river.

The real question is what will China do now? Chinese officials have set out several potential explanations for this year’s devastating drought—climate change, water-sucking eucalyptus plantations, and the failure to maintain irrigation systems. All probably play their part. But the real villain is policy failure—irrational water pricing, poor incentives for water conservation and recycling, and weak enforcement of environmental regulations. Unfortunately, if the past is any guide, local governments will ignore the need for new policy in favor of another round of fiscal stimulus-funded mega-infrastructure projects, none of which will be of any use over the long term, of course, if there are no people left to use them.