The role of the Agencies in the current crisis is something that has come up in the Presidential campaign. It is also something that can be assessed using real data -- including the recent Flow of Funds data produced by the Fed.

I would argue that this data suggests a more complex story than is commonly told. The Agencies certainly played a role in turning US mortgages into an asset that credit risk adverse central bank were willing to hold: the availability of Agency bonds with an implicit government guarantee interacted with the acceleration of global reserve growth to help make too much credit available to American households.

At the same time, it wasn’t just a story of a market hopelessly distorted by the Agencies’ implicit guarantee. The Agencies implicit guarantee isn’t exactly a new development. Moreover, at the peak of the lending boom, regulatory restrictions kept the Agencies from growing their books rapidly. The big surge in risky, exotic mortgages was made possible by a surge in demand for so called "private" MBS -- that is to say mortgage backed securities that did not have an Agency guarantee. From the end of 2003 to the end of 2006, the stock of outstanding Agencies increased by $550b, and the stock of outstanding "ABS" increased by $1850b. Not all those securities were mortgage backed securities, but a lot were. Central bank demand for Agencies freed up private funds to invest in riskier assets rather than directly financing the most risky mortgages. 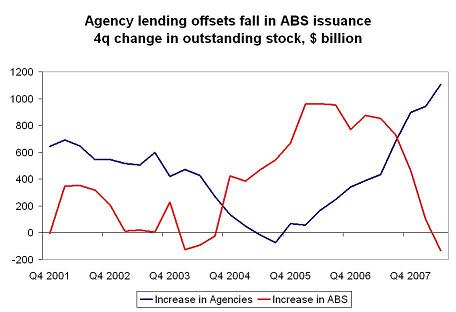 This chart also shows that the recent expansion of Agency lending has been absolutely essential to avoiding an outright recession over the past few quarters. A surge in Agency issuance has offset a total collapse in "private" MBS issuance. Without the Agencies, US households probably wouldn’t have had any access to credit over the past year. The US government actually started to intervene heavily in the market last fall, when it reduced limits on the growth of the Agencies to keep credit flowing. It isn’t an accident that the Agencies provided $1.1 trillion in new credit to the US last year, while ABS issuance fell from $900b a year to less than zero.

A couple of other charts based on the flow of funds data can help -- I think -- shed light into the global flow of funds over the past few years, the role of official demand and thus the global exposure to underlying risks.

The outstanding stock of Agency bonds didn’t increase by much from 2004 to 2006 -- the period when home prices were rising and lenders were churning out ever-more-creative mortgages to allow Americans to pay more for homes even though their incomes weren’t rising by much. 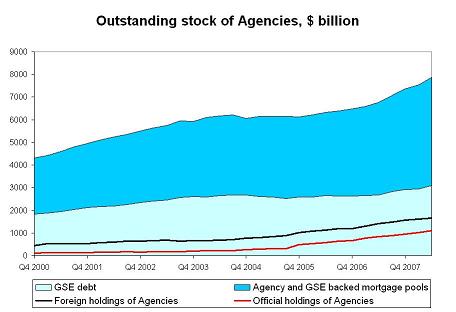 During that time, though, central banks were both rapidly adding to their reserves and increasing the Agencies’ share of their reserve portfolio. US investors who sold their Agencies to central banks could have invested those funds anywhere, but in practice, they seem to have tried to increase their returns by buying "private" MBS. The US Treasury isn’t contemplating a $700 billion fund to buy up bad assets from the banks (with a risk of substantial taxpayer losses) because US financial institutions hold a ton of Agency bonds.

The rise in short-term rates -- and the fact that long-rates didn’t rise when short-term rates rose -- played a role as well. Investors who borrowed short to lend long -- a group that includes the broker-dealers -- couldn’t make a profit without taking on more risk. They could have scaled back their activities. They didn’t. At the time I was puzzled that bank profitability didn’t fall when the yield curve inverted. With the benefit of hindsight, it did -- but only when the additional risks that the banks took on then to keep short-term profits up were realized.

The overall result was that central banks took on dollar risk and the risk that the Agencies might not prove to be Treasuries if things turned out badly, while private investors took on the credit risk associated with the housing boom. In hindsight, that looks to have been a bad trade on the part of private investors. Central banks have taken currency losses (though those are mitigated the more Asia sells off). But those losses are a lot smaller than the losses US banks (and European banks that borrowed in dollars to buy dollar-denominated MBS -- i.e. institutions like UBS) took on their mortgage book. A lot less risk was dispersed than people thought at the time.

To start, central bank demand absorbed a significant share of the incremental growth in Agency bonds outstanding since 2000. If you believe flows matter -- and I do -- central banks have been big players. 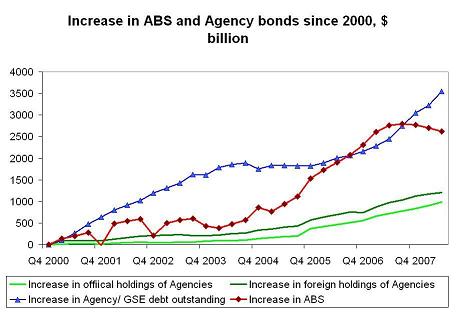 Moreover, their activities have been heavily concentrated in one segment of the market -- the bonds the GSEs and Agencies issue to fund their retained portfolio. The US data indicates that only China has a large portfolio of Agency pass-throughs (other central banks may hold pass-throughs as well, but if they do, they make use of private fund managers). Estimating the precise distribution of central bank holdings between "Agency ABS or pass-troughs" and the GSE’s own bonds in real time is hard -- but I would guess that close to $800b of the $1.1 trillion in total central bank holdings is in the GSE’s own issues. That implies that central banks are quite large players in that segment of the market. 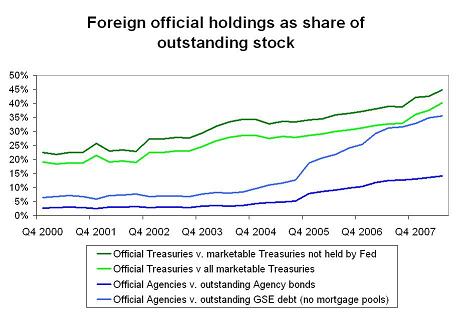 Indeed, central banks share of the GSE market may be comparable to their share of the Treasury market. The chart above wasn’t adjusted for central bank holdings of pass-troughs, but it directionally is right. It incidentally has been adjusted for private purchases of Treasuries since June 2007 - they have been reassigned to the official sector, for reasons I’ll explain in a future post of the q2 balance of payments data.