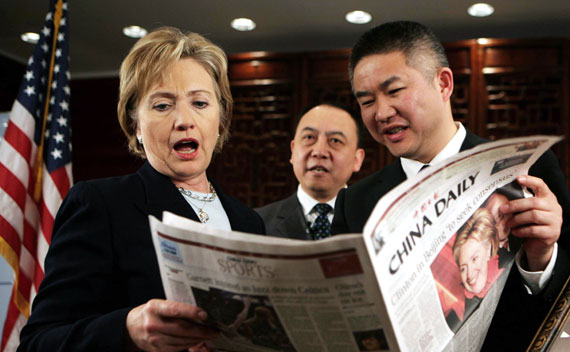 Our media are filled with pieces about China—China’s currency, Chinese human rights, "China goes green", and on and on. Soon they will be even more clogged with predictive pieces about President Hu Jintao’s state visit to the United States, now just two months away. Scholars, journalists, and bloggers (myself included) will all attempt to draw verbal Venn diagrams to figure out what the Chinese want, what we want, and where the two circles might overlap. It can be a fun (for a short while)—if not a terribly useful—exercise.

In the meantime, I thought it might be interesting in the run-up to the visit to track on and off what the Chinese commentators and thinkers are saying about the United States.  They write as much about us as we do about them. To the extent that the media reflect public opinion on the one hand and the leadership perspective on the other, our understanding of at least part of the Venn diagram can be greatly enhanced by a periodic check-in with the thinking on the other side.

So, here are four very short opinion pieces (in English) from several Chinese newspapers. I’m beginning with the Chinese perspective on the recent visits of President Obama and Secretary Clinton to Asia. Our media portrayed these trips as a largely successful U.S. diplomatic effort. The Chinese offer a somewhat different perspective. See what you think and let me know.