It has been pretty clear for some time that the oil states’ current account surplus was set to fall significantly in 2007 – oil has stabilized (at a high level, to be sure) and oil state spending and investment has picked up.

The interesting global question was whether the fall in the oil state surplus would lead to a fall in the deficits of the big deficit countries (like the US), or a rise in the surplus of the oil-importing surplus countries (like China).   Judging from China’s January-February trade data – which shows exports up 41.5% y/y and imports up 20.6% y/y – the answer is a rise in China’s trade surplus.  Japan’s surplus also seems to be growing.

January and February are typically the months when China runs a small not a big surplus.  Jonathan Anderson of UBS thinks that the January-February data indicates that China’s seasonally adjusted monthly trade surplus is now around $30b.    That is big.    It implies China’s 2007 trade surplus will easily top $300b.If I project out China’s export and import growth rates over the past three months (36% and 17%), China’s (customs) trade surplus would reach $340b in 2007. 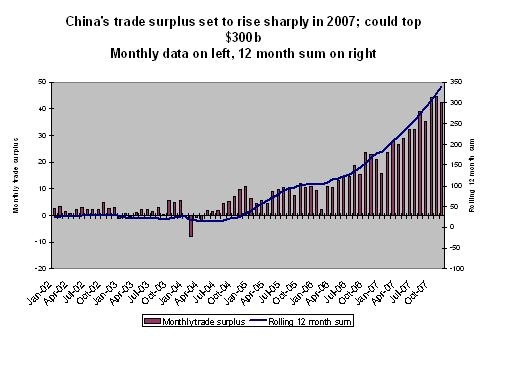 China is bringing in foreign exchange faster than China’s government can think of new ways of investing all its burgeoning foreign assets.    My earlier estimate that China, inc would need to add $400b to its foreign assets in 2007 to sustain the status quo may be an underestimate.

Interestingly enough, the US isn’t obviously driving the expansion of China’s exports.  US imports from China are up nicely – they were up 20% y/y in January.  But they have been lagging China’s overall export growth.

So who has been driving Chinese exports?

Europe (apparently Chinese exports to Europe were up 50% in February … whoah, nelly).   China’s own data – which has some problems because of Hong Kong – suggests that China’s surplus with Europe now matches its surplus with the US.

And the oil and commodity-exporting states – who really have emerged as engines of global demand growth on the back of a real estate investment splurge driven by low real rates.

The apparent continued acceleration of China’s export growth – something that started in q4 -- is going to force a lot of people to reexamine their assumptions.  Jon Anderson (whose work I respect immensely, even if I don’t always fully agree with it) was expecting China’s trade surplus to fall in 2007, as China economic cycle led it to resume importing heavy materials.   I was looking for China’s trade surplus to continue to widen – but not at this pace.   And I certainly never thought a country that is exporting about $1 trillion a year could increase its exports at a 40% y/y pace, even for a couple of months.   If you had asked me if that was possible two years ago, I would have said no way.  Chinese export growth should be slowing by now, not accelerating.

I hope it also prompts the Chinese government to reexamine some of its assumptions.  It is pretty clear that the (tiny) appreciation of the RMB against the dollar hasn’t slowed China’s export machine.  And given that the dollar has fallen v a host of currencies – not the least the euro – there is no good reason why the RMB’s small move v. the dollar should have had an impact.  The broad RMB hasn’t changed much – and given China’s strong productivity growth, it should be appreciating.    Moreover, China simply hasn’t been able to slow its accumulation of foreign assets by tightening inflow controls and loosening outflow controls.   More on that later.

Just what is in China&#8217;s portfolio? And do foreign central banks think Agencies are Treasuries?