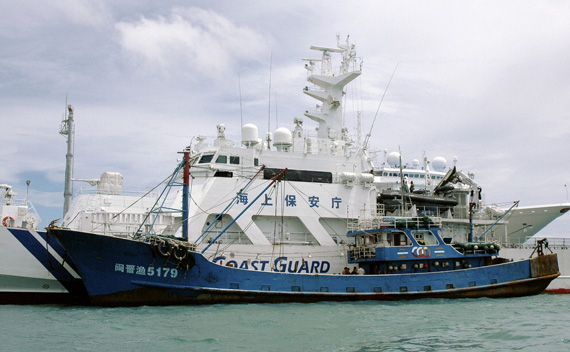 Yesterday, video of the collisions between a Chinese fishing trawler and the Japanese coast guard appeared on YouTube—sent from an account named Sengoku38. Six separate videos, for a total of 44 minutes of footage, taken apparently from the decks of Japanese coast guard vessels showed the tensions aboard as the Chinese vessel altered course twice to collide with two different Coast Guard patrol ships.

The videos have since been removed from YouTube, but the evening NHK news coverage showed the key minutes of the footage. The entire country today wants to know: who is Sengoku38? The chief of the Japanese coast guard held a press conference to say the YouTube footage was being compared with the Coast Guard videos to ascertain its authenticity. A special hearing was called in the Diet to question how such material could escape government control. In addition, a box of DVDs with a sign saying, "Help yourself to the Coast Guard videos," was found outside a Tokyo commuter station. The police is investigating.

The Japanese government explained its decision not to release the video because it was evidence in a legal investigation against the Chinese fishing trawler captain. Yet early on the Land and Transport Minister Seiji Maehara, who is now Japan’s foreign minister, suggested that the tape of the incident might be made public. In the ensuing month, rumors abounded as to the “real” content of those videos. After pressure from the opposition parties in parliament, the Kan government agreed to show a closed committee of Diet members a shortened version of the tapes on November 1.

So, how did these videos get on to YouTube, and who is Sengoku38? The Japanese government has asked YouTube for help in the investigation. The YouTube account name, of course, uses the name of Japan’s cabinet secretary, Yoshito Sengoku, who was the government spokesperson throughout the two-week crisis with China. There seems little doubt that these videos are the ones taken by the Coast Guard, and this raises the possibility that the leak came from a disgruntled government employee.

This raises two questions for Japan. The first is how the material got out despite the government’s insistence on strict control.

But the other concern is the impact the video leak will have on Sino-Japanese relations now that the public of both countries have seen the footage. Media coverage of the public reaction in Japan reveals a pretty strong consensus that the video should have been made public early on so that the events that took place on the waters around Senkaku could be fully understood by Japan’s citizens.

Yet early coverage of the Chinese internet discussions of the footage suggests that Chinese viewers see a completely different story—a heroic captain fighting off Japan’s coast guard. These disparate interpretations of the events on September 7th remain a stumbling block for both governments as they seek to find a resolution to the diplomatic rift.

With Hu Jintao expected to visit Japan next week for the APEC meeting, public sensitivities over who was to blame for the collisions in the Senkaku waters will complicate plans for a summit meeting.

Asian Cyberspace at the Cutting Edge